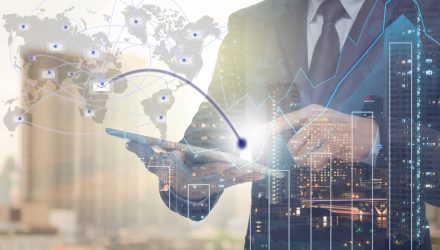 Fintech Could Get More Financial

Since the dawn of the fintech boom, some market observers have debated whether the related equities are technology or financial services stocks.

Currently, the bulk of the marquee domestic fintech companies reside in the technology sector, but that could change, ushering in a move for the likes of PayPal (NASDAQ:PYPL) and Block (NYSE:SQ) — the company formerly known as Square — to the financial services sector.

Should that move materialize, it would carry with it implications for a variety of exchange traded funds, including the ARK Fintech Innovation ETF (NYSEARCA: ARKF). Last Friday, Standard & Poor’s and MSCI, two of the largest providers of indexes used by ETF issuers, released a list of companies across all 11 GICS sectors that could be moved to another group.

The index providers “announced proforma classifications for a select list of companies potentially impacted by the proposals in the ongoing GICS consultation, with market capitalization above USD $2 billion,” according to a statement issued by S&P.

For the time being, S&P and MSCI are proposing moving Block — ARKF’s second-largest holding — and PayPal to the financial services sector. Those stocks combine for over 11% of the ARK ETF’s roster.

Those aren’t the only ARKF members that could be moved to financial services from tech. Dutch fintech firm Adyen NV and Brazil’s StoneCo (NYSE:STNE) could also make that move. That pair combines for 6% of the ARKF roster. Silvergate Capital (NYSE:SI), which accounts for 3% of ARKF, is slated to remain in the financial services sector.

Perhaps the biggest news in the S&P/MSCI proposal, at least as it pertains to tech stocks moving to financial services, is that the index providers are proposing that move for Mastercard (NYSE:MA) and Dow component Visa (NYSE:V). Should all those moves occur, the financial services sector, often known as a value destination, could wind up feeling a little growthier. However, it will be a while before the changes are implemented.

“As announced earlier on November 29, 2021, the feedback period for the ongoing consultation has been extended to February 18, 2022. Final changes to the GICS structure are expected to be announced on or before March 31, 2022, with an expected GICS Direct implementation date in March 2023,” adds S&P.