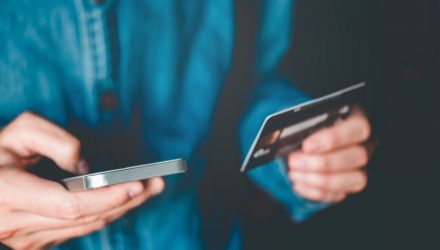 Many Americans take for granted access to traditional financial services, such as checking accounts and debit cards, simply assuming that they are universal.

That’s not the case. In fact, a recent report issued by the House Committee on Economic Disparity & Fairness in Growth noted that roughly a quarter of Americans are either underbanked or unbanked. Some experts and investors may view that as a surprisingly large percentage, and it indicates there’s ample opportunity for fintech companies to fill the banking void for many Americans.

That could be a long-term catalyst for exchange traded funds such as the ARK Fintech Innovation ETF (ARKF).

“The Federal government, FinTech companies and banks should work together to help workers receive paychecks and deposits instantly, removing friction in the payment and settlement space and ensuring financial systems are safe, secure, and instantaneous,” according to the report released by the committee.

An efficient avenue for providing banking services to the unbanked is through digital wallets, such as Block’s (NYSE:SQ) popular Cash App. Though not FDIC insured, Cash App provides customers with many of the same amenities as a traditional checking account, including direct deposit, debit cards, and more. Users can even buy and sell stocks and bitcoin on the app.

In other words, Block makes standard financial services available to everyone, and many of the app’s customers were previously unbanked or underbanked.

“Solving America’s unbanked and underbanked crisis will help millions of Americans save more money, increase their access to capital and services, and securing strong consumer protections,” noted the committee.

Robinhood (NASDAQ:HOOD), another ARKF holding, offers what’s known as Cash Management. While not a bank account in the traditional sense, that service does offer similar features, including a debit card.

Bottom line: Fintech companies, including Block and Robinhood, can play important roles in helping more consumers access standard banking services. For investors, that’s relevant because ARKF allocates 16.3% of its weight to those two stocks. Both are top 10 holdings in the fund, and ARKF is one of the largest ETF owners of Block.

“The Federal government, FinTech companies and banks should work together to help workers receive paychecks and deposits instantly, removing friction in the payment and settlement space and ensuring financial systems are safe, secure, and instantaneous,” concluded the congressional committee.