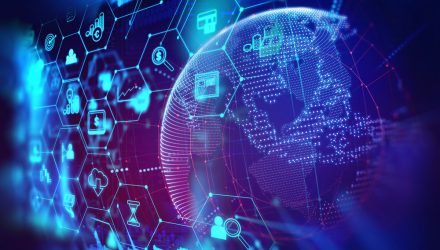 Fintech Battles Intensify and an ARK ETF is at the Epicenter

Fintech isn’t just one of the original disruptive technologies and one of the first investable areas to address that disruption.

It’s also home to some of the most intense competitive tussles among disruptive growth companies. Investors can capitalize on those battles with exchange traded funds, including the ARK Fintech Innovation ETF (NYSEARCA: ARKF).

The $4 billion ARKF turns three years old in February. In fintech terms, that’s old enough for the fund to provide exposure to some fintech titans as well as some up-and-comers that are attempting to mirror the playbooks laid out by the likes of Square (NYSE: SQ) and PayPal (NASDAQ: PYPL).

“Most fintechs start with a niche to grab users and later diversify their products. For PayPal, it was merchant-to-consumer payments; for Square, it was devices that facilitate credit card payments when inserted into tablets. Robinhood pioneered free stock trading, and SoFi made its name in the student loan industry,” reports Maggie Fitzgerald for CNBC.

As was recently reported, PayPal is looking to encroach on Robinhood’s territory by offering equity trading. Newly public Robinhood, a smaller ARKF component, is also competing with ARKF holdings, including Square, PayPal, and Coinbase (NASDAQ: COIN), by offering crypto trading.

“For Robinhood — which has plans to diversify its services — the hurdle will be getting customers to see it as more than a millennial-favored stock trading app that partially facilitates so-called meme stock volatility,” according to CNBC.

Last week, Robinhood revealed it’s working on an electronic feature that lets customers get their paychecks a couple of days early. PayPal already does that. And of course, Square and PayPal are already butting heads on multiple fronts, including the lucrative digital wallet arena where PayPal’s Venmo and Square’s Cash App are the dominant brands.

“Square pointed to consumers eschewing traditional credit, especially younger buyers. Square already offers installment loans, which the company said have a ‘powerful growth tool’ for Square’s core seller business. It plans to integrate Afterpay into both its seller and Cash App ecosystems,” according to CNBC.