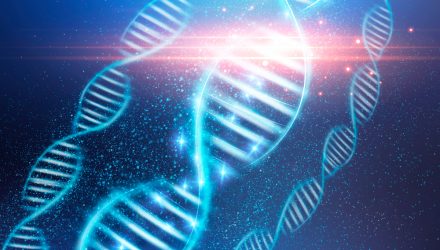 There are a lot of reasons to be skeptical of tech investing right now since last year’s broad market selloff — just how far is the Fed planning to go with rising rates this year, anyway? Still, there is a place for a smart tech slice in investors’ portfolios, especially in companies disrupting and innovating in life sciences, like Exact Sciences (EXAS), which has helped the active biotech ETF, the ARK Genomic Revolution ETF (ARKG), see some notable returns over the last week.

EXAS had already been riding high from news at the end of 2022 that its well-known colon cancer screening test Cologuard outperformed rivals. It’s exploded in price by 32.5% over the last five days thanks to strong preliminary revenues for the fourth quarter that ended on December 31 and is a great example of the kind of biotech firm that ARKG goes after according to its active approach.

EXAS’s price jump takes it well above both its 50-day and 200-day Simple Moving Averages (SMAs), with the two indicators approaching a key buy signal in the form of a “golden cross” in which the 50-day SMA moves above the 200-day metric.

ARKG invests in companies that, like EXAS, benefit from advances in in gene editing, genetic therapy, and molecular diagnostics. The active ETF holds EXAS as its largest-weighted stock at 13.3%, followed by Pacific Biosciences of California (PACB) and Ionis Pharmaceuticals (IONS) at 5.3% and 5.1%, respectively.

The active biotech ETF charges a 75 basis point fee for its approach, and in part thanks to EXAS, it has returned 9.5% over one week, the second-best performance of the entire ARK ETF suite. It has also taken in $31 million in one-week net inflows, as investors buy in to its biotech investment case.

Finding the right tech play this year won’t be easy with so many tech names heavily exposed to the U.S. and the dual challenge of rising rates and a possible recession. Still, there are longer-term plays to be found in disruptive innovation-focused companies in biotech, with ARKG a strategy to watch for investors drawn to the possibilities offered by genetic advancements.