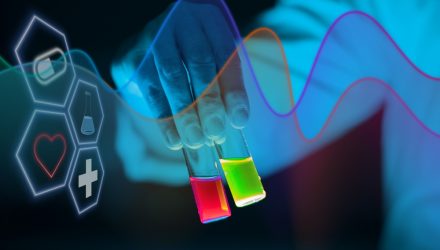 Everything Advisors Need to Know About ARKG’s Q2 Performance

The ARK Genomic Revolution ETF (ARKG) has rebounded in the past five weeks, partially offsetting negative performance and outflows experienced since the rotation to cyclicals began in February 2021.

A top performer in the health and biotech equities ETF category, ARKG has returned 30.56% over one month and has seen $114 million in net inflows over four weeks, according to VettaFi.

During the second quarter, ARKG returned -31.51%. While the fund is off to a strong start to Q3, returns over a longer period are also strong. ARKG has delivered an annualized return of 8.89% over five years, according to the firm.

Among the top detractors in ARKG during the second quarter were Exact Sciences (EXAS) and Teladoc Health (TDOC). Like smaller genomics stocks that are not in a broad-based benchmark, shares of Exact Sciences suffered, ARK Invest wrote in its Q2 2022 Quarterly Report. Exact Sciences owns two of the largest cancer diagnostic franchises: Cologuard and Oncotype.

“In our view, Exact Sciences could own the oncology diagnostic funnel by linking screening and prognostics tests,” ARK wrote. “Shares of Teladoc, the largest global digital health platform, fell significantly after the company projected that adjusted EBITDA would be 25% lower than its previous guidance, highlighting that competition for keywords in the telehealth space, particularly in its DTC (direct to consumer) mental health channels, had increased its cost of customer acquisition. For perspective, the last time it traded at these levels, Teledoc was cashflow negative, with visit volumes only 17% of current levels, paid members at 50% of the current number, and annual revenue 20% of current levels. Today, 1 in 6 Americans is a full member of Teladoc, and the company is cash flow positive. Our five-year thesis for Teladoc is built around its transition from a general telehealth provider to a B2B enterprise solution for whole-person healthcare.”

Vertex and CRISPR Therapeutics (CRSP) announced updated data for the gene-editing therapy exagamglogene autotemcel, highlighting its potential to become a one-time therapy for beta-thalassemia and sickle cell disease, according to ARK.

Shares of 908 Devices rallied sharply in June after the company showcased at the American Society of Mass Spectrometry its protocols for expediting mass spectrometry procedures. 908 Devices is a life sciences tools company that miniaturizes mass spectrometry tools to decentralize chemical and biomolecular analysis, according to ARK. The company also sells consumables and instruments that interface with existing state-of-the-art mass spectrometers to enhance or expand their capabilities.