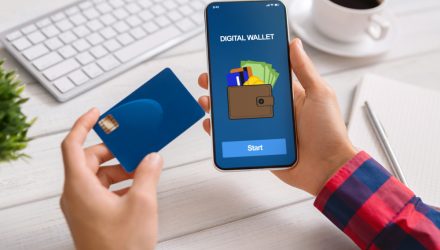 As an investment theme, fintech is catalyst rich, a trait embodied by the ARK Fintech Innovation ETF (NYSEARCA: ARKF). One of those catalysts is the movement toward digital wallets.

Today, a case can be made that digital wallets aren’t garnering the multiples they should within the fintech space, but ARK Invest argues that a day will come when digital wallets command premiums relative to traditional banks.

“According to ARK’s research, digital wallets will be valued at a premium to retail banks and, thanks to their low cost of customer acquisition, will offer banking services to low-income earners in a way that traditional banks cannot,” said ARK Invest in a recent report.

“Given ARK’s estimate of 220 million digital wallets in the US by 2024, if every user were to be valued according to the lifetime value of traditional bank customers, the digital wallet opportunity could be worth more than $800 billion,” according to ARK.

Bolstering the case for digital wallets and ARKF’s exposure to that theme is the network effect, something that has proven potent across an array of disruptive technologies.

“With network effects that appear stronger than those of social media, digital wallets are penetrating different age groups in the US in half the time that it took social media 10 years ago. Children seem to welcome parents into their payment ecosystems,” notes ARK.

Consider this about digital wallets: in the various app stores – Apple and Google most notably – PayPal’s Venmo and Square’s Cash App are two of the most downloaded financial apps. In fact, Venmo’s app is downloaded more than the app for any bank and only two bank apps are downloaded more than Cash App.

“According to ARK’s research and with more than 52 million annual active users, PayPal’s Venmo has become the largest consumer finance application in the US. Square’s Cash App ranks as number four, behind JP Morgan and Bank of America,” said ARK.