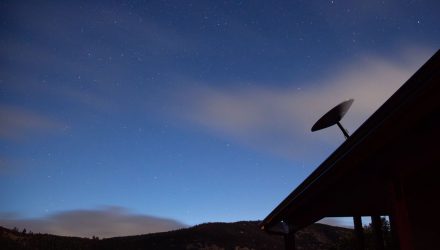 SpaceX CEO Elon Musk announced via Twitter on Saturday that his company’s Starlink service is “active in Ukraine,” with “more terminals en route” to provide the country with internet access. The tweet was in response to a request from Ukraine Vice Prime Minister Mykhailo Fedorov to provide internet service to the country amid Russian attacks.

Ukraine has suffered power outages due to Russia’s invasion. Fedorov, Ukraine’s minister of digital transformation, tweeted to Musk: “while you try to colonize Mars – Russia try to occupy Ukraine! While your rockets successfully land from space – Russian rockets attack Ukrainian civil people! We ask you to provide Ukraine with Starlink stations and to address sane Russians to stand.”

According to CNN, the exchange took place as Russian President Vladimir Putin ordered his country’s deterrence forces to be placed on high alert.

A senior U.S. defense official told reporters on Saturday that there have been “intermittent” power outages in Ukraine, but the internet is still “generally available.”

SpaceX, Musk’s private space company, has launched about 2,000 satellites around the globe to build a network called Starlink, a project designed to bring high-speed internet to the world. The Starlink system was recently used in Tonga to provide internet service to connect remote villages after an underwater volcano erupted in January. Starlink has roughly 145,000 users as of January.

Those looking to invest in companies engaged in space exploration and innovation — including the satellite communications trade — may want to consider the ARK Space Exploration and Innovation ETF (ARKX). Launched in March, ARKX is an actively managed ETF that looks for exposure to such subsectors as orbital and sub-orbital aerospace; enabling technologies such as artificial intelligence, robotics, 3D printing, materials, and energy storage; and beneficiaries of aerospace activities such as agriculture, internet access, global positioning system (GPS), construction, and imaging.