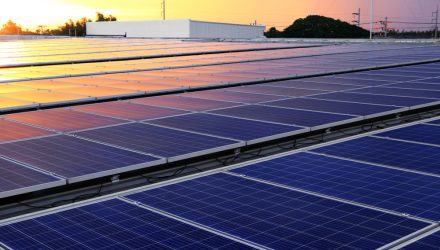 The Invesco Solar ETF (NYSEArca: TAN) is stumbling along with the broader market this month, due in part to weakness in some domestic and Chinese solar names at the hands of the novel coronavirus, but the longer-term outlook remains bright for some Chinese solar stocks.

“Despite recent stock market plunges and growing fears of economic fallout from the coronavirus epidemic, the global solar market is on track to expand by about 20% this year, according to Chinese manufacturer JinkoSolar Holding Co. Ltd.,” reports S&P Global Market Intelligence.

China accounts for over a quarter of TAN’s geographic weight, meaning the world’s second-largest economy is an integral driver of the fund’s performance.

“JinkoSolar, which shipped about 83% of its solar modules to customers outside of China in 2019, expects installations worldwide, from all providers, to reach between 140,000 MW and 150,000 MW this year,” according to S&P Global Market Intelligence.

Declining use of fossil fuels, such as coal, is widely viewed as another important catalyst for solar equities, including TAN holdings.

“JinkoSolar expects its solar module shipments to increase by at least 26% this year to between 18,000 MW and 20,000 MW. The virus outbreak in China forced the company to delay shipping between 400 MW and 500 MW of solar panels during the first quarter, but supply chains have ‘improved significantly,’ the company said,” reports S&P Global Market Intelligence.