You are at:Home»Disruptive Technology Channel»Coinbase Slide Could Be Good for Fintech ETF 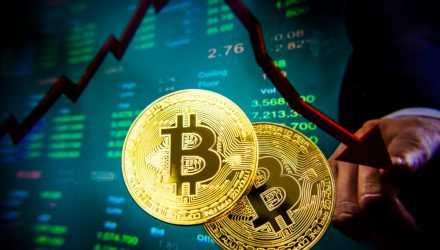 Coinbase Slide Could Be Good for Fintech ETF

Crypto exchange operator Coinbase (NASDAQ:COIN) went public in April in what was one of the most widely anticipated initial public offerings (IPO) of 2021.

The stock has subsequently shed 26% and is off almost 9% over the past week as the Securities and Exchange Commission (SEC) appears to be taking aim at the broker’s yield-generating offering. However, some analysts see significant upside ahead for Coinbase, and that would be a positive for exchange traded funds such as the ARK Fintech Innovation ETF (NYSEARCA: ARKF).

ARKF is actively managed, and that flexibility allowed it to be one of the first ETFs to include shares of Coinbase following the April IPO. As of Sept. 14, Coinbase is ARKF’s fourth-largest holding at a weight of 5.23%, making the ARK fund one of the largest ETF owners of the stock. That exposure could be a plus for ARKF.

“Despite holding an 86% correlation to the price of bitcoin since the company’s IPO, COIN shares have fallen 4% QTD while bitcoin’s and ether’s prices have risen ~28% and ~43%, respectively, QTD (through 9/13). … We believe the recent sell off is over done and reiterate our Overweight rating on COIN share,” said Piper Sandler analyst Richard Repetto in a note on Tuesday.

As noted above, regulatory inquiry is creating near-term scrutiny on Coinbase, forcing the company to delay its lending product, but Repetto sees ample revenue generating opportunities beyond the lending offering.

“We are not currently, nor were we previously, modeling future revenues from Coinbase Lend. Thus, COIN’s decision to delay the product launch until October does not impact our forward estimates,” said the analyst.

Beyond Coinbase, ARKF has strong exposure to the equity-based corner of the crypto ecosystem thanks to a combined weight of nearly 15% to Square (NYSE:SQ) and PayPal (NASDAQ:PYPL).

Additionally, ARKF isn’t the only ARK fund with a significant position in Coinbase. The stock is a top five holding in the famed ARK Innovation ETF (NYSEArca: ARKK) and is the fourth-largest holding in the ARK Next Generation Internet ETF (NYSEArca: (ARKW). As is the case with ARKF, ARKK and ARKW are both actively managed funds.