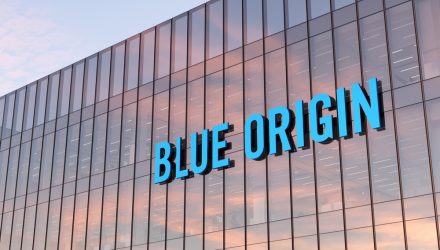 Blue Origin Flight Has ARKX Back in Limelight

With civilian space travel still in its infancy, successful flights by Blue Origin and rivals like Elon Musk’s SpaceX are notable achievements and put the investment spotlight on exchange traded funds like the ARK Space Exploration and Innovation ETF (ARKX).

The actively managed ARKX, the first new ETF introduced by ARK Investment Management in 2021, gained 1.71% last week in advance of the Blue Origin flight. That might be no more than a coincidence, but the fund is undoubtedly one of this year’s most successful new ETFs, as highlighted by its $495.4 million in assets under management following its late March launch.

More importantly, the space investment thesis is only scratching the surface of its potential and could be a major long-term disruptor for patient investors.

For his part, Musk would like to colonize Mars — certainly a far-ranging concept that could take decades to realize or even ultimately prove impossible. Still, that’s part of the allure with space: conquering the unknown and perhaps the impossible. The investment complications there are compelling.

“By 2040, Morgan Stanley estimates the potential revenue from the global space industry could surpass $1 trillion, from $350 billion today, an increase of 186 percent. In addition, possible breakthroughs in aerospace and defense, satellite-broadband internet, telecom, and high-speed cargo delivery may propel the industry to new highs,” reports Giovanny Moreano for Bankrate.com.

Importantly, the space investment thesis isn’t dependent on tourism, which is mostly reserved for well-heeled consumers. Morgan Stanley estimates that satellite-broadband, a concept ARKX offers exposure to, could represent 70% of space spending by 2040.

“We believe the largest opportunity comes from providing Internet access to under- and unserved parts of the world, but there also is going to be increased demand for bandwidth from autonomous cars, the Internet of things, artificial intelligence, virtual reality, and video,” says Morgan Stanley analyst Adam Jonas.

Those are concepts that ARK knows its way around and that could prove fruitful for long-term ARKX investors.