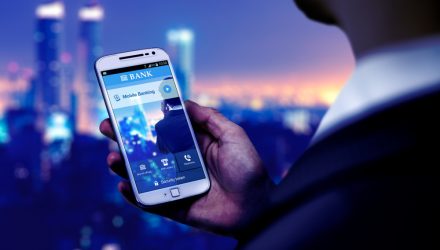 Bank on a New Generation of Banking With This Fintech ETF

Standard banks still dominate the traditional financial services, but they’re being disrupted in a big way by a new breed of competitors, some of which are accessible via the ARK Fintech Innovation ETF (NYSEARCA: ARKF).

It’s fair to say ARKF is the king of the digital wallet space and with that status comes another compelling trait: Some of the best exposure to companies providing banking services to the unbanked. That’s right. For a variety of reasons, many Americans don’t use a traditional bank.

“Fuel for the Cash App fire is another often overlooked catalyst: the unbanked. Not everyone banks at a traditional venue, like a Bank of America or Wells Fargo. For any number of reasons, millions of American’s don’t use such standard institutions and many of them count on Cash App as their bank of choice,” according to Nasdaq.

Cash App is owned by Square (NYSE: SQ), ARKF’s largest holding, and acts as a primary bank account for millions of Americans.

“The Cash App’s US geographic concentration is in the south,” according to ARK. “In 2018, several reports highlighted that Square’s Cash App was especially popular with low-income consumers in cities like Atlanta where unbanked rates are high.”

Data confirm that digital wallets such as Cash App are winning the battle with so-called “challenger banks” and that the venture capital community may be overvaluing the latter.

“Moreover, according to industry sources, their CACs range from $50 to $500, depending on their organic growth, above the $20 for digital wallets,” according to ARK. “Even with fairly low CACs, however, challenger banks seem to be experiencing “challenges” in retaining users. In conversations with industry sources, we have learned that only 20-40% of their users are active on a monthly basis, suggesting that venture capital funds are valuing some challenger banks at more than $2,000 per active user.”

Additionally, markets appear to be undervaluing digital wallets and as that changes, ARKF is poised to benefit.

“Second, markets aren’t yet appropriately valuing digital wallet customers. A traditional bank’s customer is worth $3,650, using traditional metrics, but a Cash App or Venmo is valued at a fraction of that, indicating that ARKF is a growth idea, it may actually be undervalued,” reports Nasdaq.