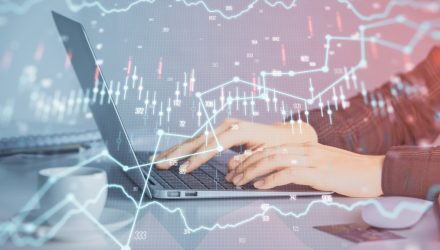 Automation is becoming a larger part of the industrial and investment lexicons, and some experts believe that 2022 could be a tipping point for concepts such as autonomous logistics and transportation.

It is possible that significant strides could be made in autonomous transportation this year, but this is a long-term concept. Either way, the ARK Autonomous Technology & Robotics ETF (CBOE: ARKQ) stands out as one of the exchange traded funds best positioned to benefit from logistics and transportation technological advancements.

Ride-hailing is fertile territory for autonomous expansion, and that could be a long-term positive for ARKQ investors.

Tesla (NASDAQ:TSLA), ARKQ’s largest holding, is a leader in autonomous transportation technology, which could eventually be embraced by ride-hailing companies. Last year, the latest version of Tesla’s Full Self-Driving (FSD) Beta software version 10.8 was hailed as a significant advancement on the autonomous frontier.

Some analysts believe it’s possible that Tesla will roll out its FSD technology across its entire fleet this year and that the technology’s competence will evolve rapidly over the next two years, potentially providing another lucrative revenue stream for the electric vehicle giant.

“Today, consumers pay $2 per mile on average for ride-hail, significantly more than the marginal cost of driving a personal car and the perceived value of their time,” adds ARK’s Keeney. “ARK’s research suggests that the value consumers place on their time and on convenience will support prices for autonomous ride-hail higher than our estimated price floor of 25 cents per mile. We expect tiers of service to emerge at different price levels.”

Making ARKQ all the more compelling is the fact that a company like Tesla owns its autonomous technology. The company is the developer of the tech, and it’s not outsourcing production to another company. That’s important because transportation companies relying on other companies for autonomous technology risk being left behind in this transition.

“According to our research, companies that own the autonomous technology stack could dominate enterprise values in the future auto ecosystem. We believe that many of today’s ride-hail, auto manufacturing, and car rental companies will not survive the transition,” concludes Keeney.