You are at:Home»Disruptive Technology Channel»Autonomous Tech ETF Could Find Support Under California Sun 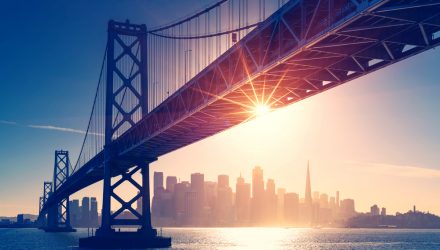 When it comes embracing disruptive technology, be it renewable energy, healthcare innovation, or other concepts, California is often a leader.

Last week, the California Department of Motor Vehicles (DMV) signed off on licenses allowing Waymo and Cruise Automation to offer autonomous taxi services, setting the stage for the companies to offer fee-based rides with no drivers.

“Previously, each could test driverless services without charging customers, the service was limited to participants in testing programs, mainly employees and friends,” according to ARK Invest research. “This approval signals that California regulators are supporting the rollout of autonomous taxi technology, and that Waymo and Cruise are competing to launch the first robotaxi service for the general public in that state.”

Yes, California is just one state, and it will take some time to see how Waymo and Cruise Automation autonomous efforts unfold there. However, it is the largest state by population, and if the autonomous taxi gambit proves successful there, more cities and states could be compelled to give it a try.

That’s one of way saying that ARKQ investors need to be patient, but there are reasons to be optimistic, too.

“ARK estimates that autonomous taxis could generate roughly $10 trillion in revenue within the next ten years, with platform operators capturing roughly $4 trillion in net revenues. If earnings were to reach half of net revenues, autonomous platform providers could scale from nil today to approximately $40 trillion in enterprise value,” according to ARKQ’s issuer.

Actively managed, the $2.77 billion ARKQ features exposure to both robotics companies and those with leverage to the autonomous transportation boom, confirming that the ETF covers a lot of bases in what’s expected to be one of the most disruptive of the emerging disruptive technologies. Not only there are investment implications for ARKQ, but evolving autonomous transportation could bring tangible real world benefits, too.