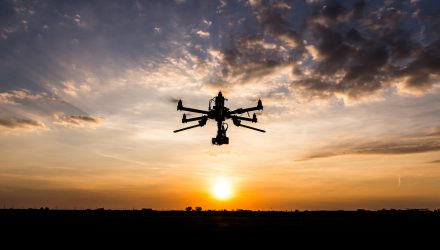 As Winter Sets in for Ukraine, ARKX Poised for Drone Orders

No other event impacted markets this year like the Russian invasion of Ukraine. The Russian military started a new offensive this week looming over Ukraine’s liberation of previously-occupied Kherson. As winter looks set to harden battle lines, investors looking for a drone ETF should closely examine the ARK Space Exploration & Innovation ETF (ARKX) and its third largest holding AeroVironment (AVAV).

AVAV received an upgrade from a Raymond James analyst late last week due to an acceleration in orders over the last few months, highlighted by news Thursday that the U.S. Army awarded an $86 million contract to the firm.

AVAV’s unmanned aerial vehicles have played a notable role in American efforts to support Ukraine against Russia, increasing demand for their recon and surveillance capabilities. That demand increase has shown up in its stock price, which is up 6.6% over the last five days and 20.2% over the last month compared to just 15.6% over the last six months.

Due to its narrow tech focus on firms working in spaces that can support space exploration like robotics, materials, and 3D printing, it can augment rather than replace a core tech holding. Add in its recent upswing in performance, returning 10.3% over one month compared to -13.3% over the last three months, and it can be a handy addition to a bullish investor’s portfolio.

Just over a year old, having launched in March last year, ARKX charges a 75-basis point fee for exposure to its holdings and strategy. As investors are plowing back into ARK Invest’s suite via other strategies like the flagship ARK Innovation ETF (ARKK), investors may want to keep track of ARKX and its potential to grow as drone demand rises for Ukraine and its allies.