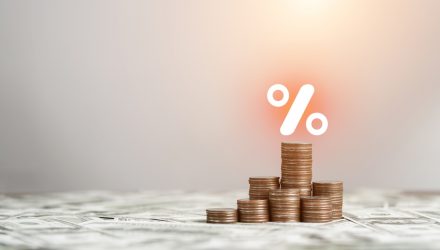 Despite it underperforming broad-based market indexes during the second quarter, investors continued allocating assets to the ARK Fintech Innovation ETF (ARKF) in June.

ARKF was ARK Invest’s most popular fund in June, as measured by net inflows, taking in $31 million during the month. Investors are being rewarded, as ARKF is up nearly 6.5% over a five-day period and has increased over 11% over a one-month period as of July 22, according to YCharts. The fund is still down 56.6% year-to-date, suggesting that now may still be an opportune time to jump back into the market while funds are still trading at a discount.

After years of outperformance, growth and high beta were the worst performers during the first half of the year, according to S&P Dow Jones Indices. Spooked by a hawkish Fed, many investors took money off the table during the second quarter; however, a new narrative is emerging as bright spots can be found in the latest inflation data, leaving investors wondering if it’s time to buy up the growthiest segments of the market again.

As investors ponder their decision to jump back in from the sidelines, it’s important to understand the drivers of ARKF’s negative performance observed in the first half.

Among the top detractors during the second quarter were Coinbase Global (COIN) and Shopify (SHOP).

“Coinbase also faced internal challenges, including layoffs and less-than-expected traction in its NFT marketplace,” ARK wrote. “Despite the headwinds, Coinbase provided several updates to its crypto payment offering, Coinbase Commerce, and launched several new products including its first derivatives product, Nano Bitcoin Futures, and Solana staking. In our view, Coinbase is the premier, regulatory-compliant crypto platform with major competitive advantages in an industry as it consolidates.”

Shares of Shopify sold after earnings missed expectations, and management softened guidance and announced an increase in investment spending for 2022, ARK wrote.

“Investors seem concerned that a recession will hit consumer spending, exacerbating the post-COVID slowdown in Shopify’s sales,” ARK wrote. “In our view, the coronavirus crisis accelerated the adoption of ‘social commerce.’”

Among the top contributors to ARKF’s performance during the second quarter were JD.com (JD) and Twitter (TWTR). Shares of JD.com appreciated after the Chinese government appeared to be easing its regulatory crackdown on internet companies to stimulate its economy. Additionally, the number of COVID cases receded toward the end of the quarter, bolstering sentiment in the Chinese market, according to ARK.

Shares of Twitter appreciated after Elon Musk disclosed a significant stake in the company and then bid to purchase it, according to ARK.