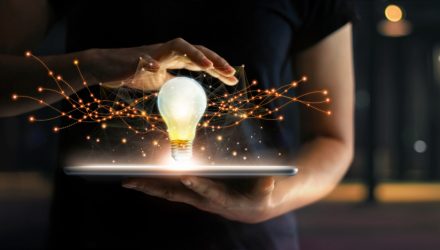 There are story stocks and there story are ETFs. The ARK Innovation ETF (NYSEArca: ARKK) is a little bit of both, due in part to its sizable allocation to Tesla.

However, the electric vehicle maker isn’t the only story with ARKK. Amid a surge of inflows earlier this year, ARKK became the largest equity-based actively managed ETF by assets, easily pulling ahead of its next closest and it’s clear investors aren’t done embracing this ARK fund. Last Wednesday, ARKK hauled in $124 million, according to Bloomberg.

“ARKK has surged in popularity since the coronavirus pandemic rattled global markets, as traders seek to bet on companies developing groundbreaking technology,” reports Claire Ballentine for the news agency. “The actively-managed fund led by Cathie Wood has a 77.4% return year-to-date, placing it in the top five best performing equity ETFs, along with two of the firm’s other products that focus on genomics and internet technology.”

For the week ending Aug. 21, inflows to ARKK totaled nearly $281 million, a tally surpassed by just eight other US-listed ETFs.

ARKK on the Rise

Year-to-date, investors added $3.07 billion to ARKK. Tesla is helping, but so are exposures to other high-growth equities.

In addition to Tesla, Nvitae (NASDAQ: NVTA), Roku (NYSE: ROKU) and Square (NYSE: SQ) are among the names driving ARKK upside this year. Those stocks combine for almost 19% of ARKK’s weight.

“ARKK has been a top performing fund this year and in the last few years,” said Linda Zhang, chief executive officer of Purview Investments, in an interview with Bloomberg. “Such an achievement is not coincidental.”

Indeed, big gains from ARKK aren’t a new phenomenon. Over the past three years, the fund is higher by almost 207%, beating the S&P 500 by a margin of better than 4-to-1.