You are at:Home»Disruptive Technology Channel»ARK Unveils Another Big Price Target for Tesla 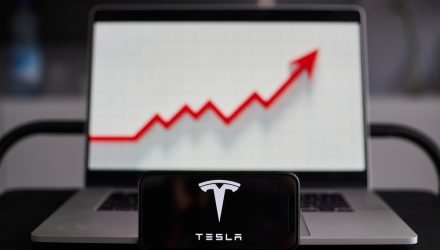 ARK Investment Management is out with its latest price forecast on electric vehicle giant Tesla, and it carries with it implications for several exchange traded funds, including the vaunted ARK Innovation ETF (NYSEArca: ARKK).

Elon Musk’s Tesla closed around $655 last Friday and is lower by almost 17% over the past month, but ARK sees more upside ahead. Much more.

“Last year, ARK estimated that in 2024 Tesla’s share price would hit $7,000 per share, or $1,400 adjusted for its five for one stock split. Based on our updated research, we now estimate that it could approach $3,000 in 2025,” writes ARK analyst Tasha Keeney. “To arrive at this forecast, ARK used a Monte Carlo model with 34 inputs, the high and low forecasts incorporating 40,000 possible simulations.”

Tesla is ARKK’s largest holding. While that’s not been a positive in recent days, it’s an advantageous trait over the long-term, particularly as more investors recognize Tesla’s potency as a software maker.

“Since our 2024 analysis, we have increased our assumptions for Tesla’s capital efficiency. Previously we estimated that Tesla would spend $11,000-$16,000 per incremental unit of capacity in 2024,” notes Keeney. “In 2019, Tesla spent $1.33 billion on capital expenditures (capex) and produced 509,737 vehicles, an increase of 144,505 vehicles from the previous year, suggesting that its capex per incremental vehicle produced was roughly $9,200.”

One of the key components in evaluating growth strategies is execution. ARKK has the benefit of active management, meaning it can target areas often overlooked by traditional passive rivals.

“In our last valuation model, ARK assumed that Tesla had a 30% chance of delivering fully autonomous driving in the five years ended 2024. Now, ARK estimates that the probability is 50% by 2025. Since our last forecast, neural networks have solved many complex problems previously considered unsolvable, increasing the probability that robotaxis are viable.” concludes Keeney.