You are at:Home»Disruptive Technology Channel»Ark Invest Is Still Bullish on Tesla 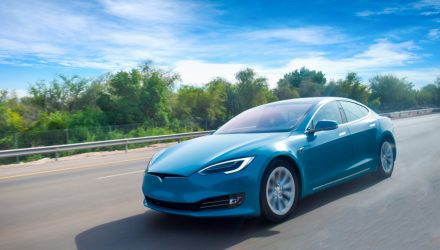 Tesla (NASDAQ:TSLA), the largest domestic electric vehicle (EV) manufacturer, is experiencing a rough 2021. The shares are off 18.11% (as of May 18), and that slump is affecting an array of exchange traded funds, including the ARK Innovation ETF (NYSEArca: ARKK).

ARKK allocates nearly 10% of its weight to Elon Musk’s company, making it one of the largest Tesla holders among all ETFs. The ARK Autonomous Technology & Robotics ETF (CBOE: ARKQ) devotes just over 10% of its lineup to Tesla while the ARK Web x.0 ETF (NYSEArca: ARKW) has a roughly 10% weight to the EV giant.

Obviously, those aren’t favorable points given the fact that the stock is down 18%. Yet Tesla could be poised to rebound because the White House is putting EV adoption front and center in President Biden’s massive infrastructure package.

“About $174 billion of the infrastructure bill is dedicated to a wide range of green initiatives, including building out and supporting the transition to electric vehicles,” says Morningstar analyst Dave Sekera.

Within the Biden proposal is a tax credit plan aimed at motivating car buyers to go electric.

“One of the initiatives is a tax credit paid out for the purchase of new electric vehicles, including autos as well as buses and trucks,” adds Sekera. “We currently forecast that by 2030, about 20% of new-vehicle sales in the United States will be battery electric vehicles and another 30% will be hybrids. But if the infrastructure plan is enacted as proposed, we expect this adoption rate will be even higher.”

This tax credit is a potentially material issue because Tesla is considered a luxury brand. Its sticker prices are more in the Mercedes/BMW stratosphere, not the Chevy/Ford realm. Any avenue to defray some of this cost could be attractive to would-be Tesla buyers.

As for ARK Invest, the fund manager remains a fan of Tesla, and is buying on the recent dip. Cathie Wood’s firm bought 47,000 shares in Musk’s company on Tuesday – ARK’s first purchase of the stock in a month. That purchase was directed to the aforementioned ARKQ.