You are at:Home»Disruptive Technology Channel»Analysts Are Hopping Back on the Tesla Train 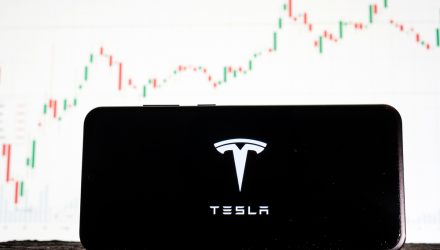 Analysts Are Hopping Back on the Tesla Train

It hasn’t been the smoothest of rides for Tesla for this year, but some sell-side analysts are again warming to the electric vehicle (EV) maker, and that could spark some upside for the famed ARK Innovation ETF (NYSEArca: ARKK).

At least one analyst is highly enthusiastic on Tesla, which is one of ARKK’s largest components.

“Cannacord analyst Jonathan Dorsheimer upgraded Tesla (ticker: TSLA) shares to Buy and increased his price target from $419 to $1,071. That represents a 124% boost to his previous target price,” reports Al Root for Barron’s.

The Bullish Case for Tesla

One of the key components in evaluating growth strategies is execution. ARKK boasts the benefit of active management, meaning it can target areas often overlooked by traditional passive rivals.

“Dorsheimer’s case is built around all of the different businesses Tesla is now involved in. He believes the auto maker is similar to a platform company like Apple (AAPL). Apple sells hardware such as phones and computers,” according to Barron’s. “It also offers music, entertainment, cloud, and other services on a subscription basis. Tesla, for its part, sells more expensive hardware–namely vehicles–and sells solar roofs and battery storage. It sells software and services such as self-driving upgrades for its vehicles and electricity via its nationwide charging network, too.”

Rapid adoption of EVs should be propelled by improving battery technology, favorable economics for buyers, and an acceleration in investment in EVs by automakers. Innovations in battery technology by EV companies also have had positive implications for the rest of the alternative energy space.

“Many analysts have focused on the potential of Tesla’s self-driving software and its future robotaxi service. Dorsheimer, however, believes energy storage is a large opportunity as well. He projects $8 billion in energy storage sales by 2025,” concludes Barron’s.