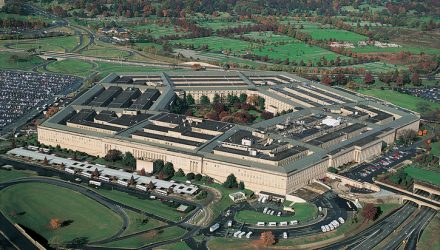 Defense ETFs Shoot Up as Senate Mulls $700B Defense Bill

Aerospace and defense ETFs jumped Monday as the Senate is widely expected to pass a $700 billion defense policy bill to bolster the Pentagon’s budget, stop the closure of military bases and expand on U.S. missile defenses in light of heightened risks posed by an increasingly bellicose North Korea.

A defense bill is expected to be approved Monday by a wide margin on bipartisan support as President Donald Trump, who has not voiced any intent to veto the measure, pushes for cooperation with congressional Democrats, reports Richard Lardner for the Associated Press.

The Senate bill would provide $640 billion for core Pentagon operations, including purchasing weapons and paying troops, along with another $60 billion for wartime missions in Afghanistan, Iraq, Syria and elsewhere. The bill would also include $8.5 billion allocated to strengthen U.S. missile and defense systems in light of North Korea’s nuclear program and missile tests that are seen as a clear threat to U.S. and its allies.

On Friday, North Korea conducted another long-range test flight of a ballistic missile that once again flew over Japanese airspace.