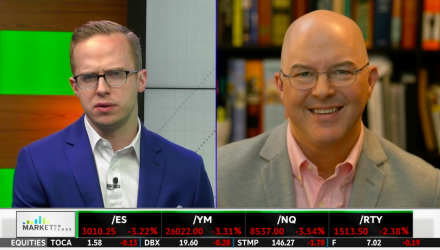 Is there a major selling event going on amid major market drops? ETF Trends CIO and Director of Research, Dave Nadig, appeared on the TD Ameritrade Network on Thursday with host Oliver Renick to go over what kind of impact recent events have had on the ETF market.

According to Nadig, there are still flows into ETFs. Of course, people are selling their U.S. equities, which is why the market is down. However, there have been flows into gold and bonds. That should show people are still using ETFs; they’re just relying on them to re-allocate their risk, which is a healthy reaction.

“Nobody enjoys times like this, but the structures are working,” Nadig said.

In regards to equities and outflows, Nadig explains how flows have gone into more cash-like vehicles on the short end. That said, there haven’t been any big routes. Over the last couple of days, while investors have taken money out of bellwethers such as SPDR S&P 500 ETF (SPY), there’s been funds like the Vanguard &P 500 ETF (VOO) pull in some assets. So, as of now, the long term money seems to be holding in place.

As far as international funds and areas such as emerging markets or the iShares China Large-Cap ETF (FXI), Nadig notes, specifically for FXI, they’ve held stronger than most of the market.

“The worst may be over for China locally. Now we have to deal with both the financial and the literal contagion from the shutdown that we’ve seen,” Nadig said.

There’s still reason to be skeptical of the numbers China has offered up. However, FXI has still managed to appear surprisingly strong.

As far as notable hedge plays, which work as protective funds building armor, Nadig explains how the Amplify BlackSwan Growth & Treasury Core ETF (SWAN) has been worth following, as this is the kind of market this fund was designed for. The strategy it follows has worked surprisingly well, which has resulted in $30-$35 million come in during the past couple of days. So, for investors that have relied on SWAN as their hedge has been taking in plenty of rewards.

On the momentum value front, Renick notes how there’s been a pullback, overall, but there’s some outperformance for value-labeled funds. From Nadig’s perspective, what’s being seen in the factor space could be noise.

“Sure, min-vol funds are outperforming the market. They’re not immune,” Nadig adds. Still, “You’re definitely fully exposed. When we start talking about the splits we’ve seen in momentum and value, honestly, we’re talking 10, 20, 30 bases points here and there on a day when we’re moving 3-4%, it all strikes me as noise. I wouldn’t read too much into it.”

In terms of where the blame is to be directed in regards to ETFs, Nadig is sure to explain how there haven’t been any major hiccups in the ETF market, despite the chaos surrounding it. Really, it’s a healthy effect, as the reaction seen in the market is based on the uncertainties from the virus and the uncertainties of how that’s hitting supply lines. This is how capital markets are supposed to work.

“Honestly, the ETFs have been doing what they’re supposed to do, providing liquid, easy access to make these kinds of moves if you’re so inclined.