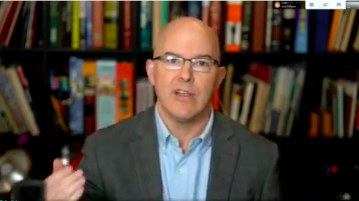 ETF Trends CIO and Director of Research, Dave Nadig, appeared on Yahoo Finance Live on Wednesday with host Seana Smith to discuss what’s going on with oil, following some tremendous shifts in price.

The United States Oil Fund (USO) has a bit of a rebound in price on Wednesday, after the historic losses seen at the start of the week. Settling up at 19% of $13.78 a barrel, Nadig put some focus on what was seen in crude oil, as well as USO, which is an extremely popular ETF for many retail investors.

As far as how badly burned investors are getting over by this ETF, Nadig explains how this is an unprecedented situation, with a massive oversupply at the Oklahoma pipelines, and as with the USO ETF ideally investing in front-month futures, there’s been a lot of demand. That said, it can’t make those loans anymore – the June futures.

Oil futures speculators likely got caught, owning the May contract on the day it was set to expire. As Nadig makes clear, every brokerage in the country he can think of has very strict rules. If investors are still holding going into expiration, firms will sell them out of their position rather than be stuck with delivery. So they literally paid people to close out the contracts.

Still, no ETF held that contract. However, USO, which does own the June contract, is under tremendous pressure. So much money flowed in in the past eight sessions (over $2 billion) that they had to ask the SEC to allow them to mint new shares. Right now, they can’t, so it’s trading at a premium. They’re also so big now that they cant stick to the front-month contract and are having to spread their bets over the next few months to avoid hitting CFTC position limits.

All of this means USO is a bit of a broken ETF at the moment, and investors should probably be avoiding it at least until the oil market settles more.

As far as what to do currently, if investors are seeking a less volatile strategy concerning oil, Nadig notes two good ways to do this. There’s the United States 12-Month Oil Fund (USL), which owns each of the next 12 months contracts. This helps “smooth the ride” and mitigate contango. The better option is the Invesco DB Oil Fund (DBO), which seeks to pick the right months to minimize contango or even profit from backwardation. They’ve all been crushed of course, but DBO is down “only” 48% over the last year, versus down 80% in USO.

Nadig adds, “It’s worth pointing out that we’re talking about an extraordinarily volatile asset class, with really no good way to predict what’s going to happen. We’re going to be in a supply glut for some time, and that’s a really hard thing to get out of.”