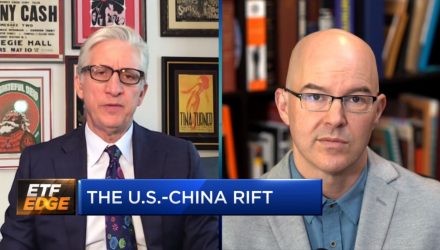 Despite the potential for China, Chinese stocks have underperformed the U.S. in the past 10 years. Will an increased amount of regulations upset the possibility of better performance?

On this week’s “ETF Edge,” Dave Nadig, CIO and director of research at ETF Trends, and Brendan Ahern, CIO at KraneShares, predicts the path forward for Chinese stocks with CNBC’s Bob Pisani.

With news regarding China potentially outperforming the S&P 500, Nadig explains how there’s a bull case for China over a longer timeframe, given how their economy is probably going to be more of a driver than the U.S. economy. Part of the issue with how much trust to put into the long-term rally is if they will induce volatility by way of pushing the market in various directions by manipulating public opinion. However, that doesn’t tend to affect the long-term.

“Funds like KWEB, which has been at the front-end of this transition in the economy, are phenomenally great ways to make those long-term plays,” Nadig adds.

Moving to Ahern, with thoughts concerning the percentage of household wealth and how the U.S. and China compare in that matter, the question becomes how can those in China get themselves more invested in the stock market in a long term way. Ahern explains how a small shift in asset allocation in China are ways that could send this market higher.

Regarding the momentum going towards stricter regulation on China (and their response), Ahern feels Chinese companies in the U.S. should be showing their audit books to comply. That said, Ahern also notes that the effort to handle this has been politicized to the point of making it seems as though enacting certain regulations is somehow hurting China as a whole, despite the trillion+ dollars associated with U.S.-based names.

Jumping back to Nadig, he agrees that there’s a political element that is dictating the continued strife here, rather than more logistical reasons.

“The idea that they’re going to de-list BABA, etc., I think is ridiculous,” Nadig adds. “If they get de-listed, it should be for breaking the rules of their listing venue of that exchange. We can tighten up those rules and increase transparency, but I do think this has become over-politicized.”