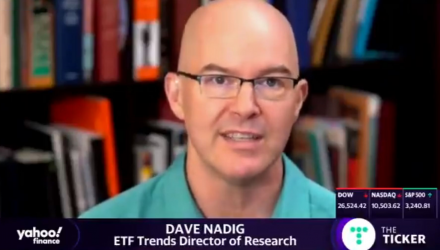 Aaron Neuwirth July 28, 2020
Gold has had a great month and has continued pushing higher, with the bank upgrading its forecast from $2000 to $2300 an ounce. This is coming from uncertainty around several areas, including the potential second wave of Coronavirus infections, which will all likely lead to the price of gold being driven even higher.
Dave Nadig, ETF Trends’ CIO and Director of Research, spoke with Yahoo Finance host Akiko Fujita on the ETF Report in regards to how the push for gold is having an effect in the ETF space.
“It’s been a bit of a gold rush,” Nadig states. “Very recently, in just the last week, precious metals ETFs have pulled in over $2.5 billion in new money, and in the past month that number balloons to $6.5 billion, making it one of the strongest months for gold inflows that we’ve seen. Clearly, that’s part of what we’re seeing in the rise here.”
ETFs make up a significant portion of gold demand now, making anywhere up to 25%. The regular other sources of demand tend to come from central banks, Indian wedding season buying, Asian buying. Those areas have been more muted than usual, while the ETF realm remains incredibly strong.

Nadig then gets into some interesting information, in that a lot of that money — about half of it — is probably going into the wrong fund: the SPDR Gold Trust (GLD). To be clear, GLD is an excellent ETF and is widely used by institutions that need the monumental liquidity it brings. However, it charges an enormous 0.40% expense ratio just for warehousing gold in a London Vault.
Two cheaper alternatives only charge 17 bps. They are the Aberdeen Standard Physical Gold Shares ETF (SGOL) and the GraniteShares Gold Trust (BAR).  Both funds have more than enough liquidity for most investors and cost less than half as much as GLD.  For an asset with zero income and no earnings like gold, the expense does equal everything.
“Gold is only worth what people will pay for it. So, minimizing your cost is really critical,” Nadig adds.

Highlight: “As a monetary play, … you do really need to focus on gold,” @ETFcom Director of Research @DaveNadig says. “That’s the one central banks will be buying up. That’s the one that countries will look to if they no longer have faith in the strength of the U.S. dollar.” pic.twitter.com/hLElk9s9Ys

Also of note, silver has been moving in tandem as well. Nadig specifically points out the iShares Silver Trust (SLV), which has been the go-to for most silver investors. SLV and silver, in general, act more like volatile gold. Looking back to March, silver traded way down, about 30%. However, it’s bounced back big time and is now actually beating gold on a YTD basis.
Still, when looking at what’s happening with these precious metals and what to work with as far as replacing the reserve currency, which is being talked about a lot, currently, Nadig believes the emphasis really should be on gold. It’s what central banks will be buying up, and where countries will look to if worried about the strength of the U.S. dollar.
Nadig continues, “With gold at all-time highs and the dollar down over 6% in 3 months and equity valuations near all-time highs, it’s reasonable that investors might be scratching their heads and wondering what’s going on.  While I won’t make the call that ‘now’s the time for gold,’ clearly a huge swath of investors is, in fact, making just that call.”