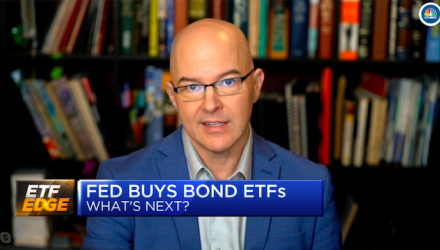 Kicking off the weak is news of the poor showing concerning transport ETFs, despite efforts from government bailouts. ETF Trends’ CIO and Director of Research Dave Nadig was on hand to discuss this news in regards to the U.S. Global Jets ETF (JETS) with CNBC’s Bob Pisani on his segment “ETF Edge.”

JETS is designed to provide broad exposure to the Industrials – Transportation/Shipping segment of the equity market and is a passively managed ETF. It’s also been an increasingly popular option among retail and institutional investors.

Now, however, JETS is getting clobbered. Additionally, there’s been an enormous increase in the shares outstanding in this ETF for the last month and a half. It’s likely due to professional investors who are creating shares to essentially short them or hedge with them. It’s similar to what happened with the oil ETFs a few weeks ago.

For Nadig, he notes how there’s been a pattern of consistent $20-30 million in flows, day after day, which is not consistent with a big rise in shares being shorted. That shares outstanding being shorted has gone up, but nowhere near as much as the money that’s recently come in, so in this case, Nadig believes many people are trying to call the bottom.

JETS is down around 56% over the last three months (even XLE is only down 30%), making it one of the only sectors of the market, let alone one of the only ETFs that never caught a bounce. It’ still trading close to its March lows. As a result, many are hoping there’s some sort of government bailout that can act as the Fed put; the buyer of last resort, as they say.

“There’s no question these are beleaguered and beaten up companies,” Nadig adds.

That in mind, Pisani still questions how much of these ETFs are influenced by professional investors coming in and out versus retail. As there would likely be more retail interest, Nadig’s points make sense, but the creation of interest is so large, one could think there’s more going on outside of hopes of a bailout.

Adding some thoughts, Simeon Hyman, Global Investment Strategist for ProShares, notes how the ETFs do create additional liquidity beyond the individual shares. Also worth pointing out from a market-look perspective is how, in the downturn, correlations went sky high, but now dispersion methods telling people what will and won’t succeed, and how this will all be a particular kind of recovery.

Chris Hemstead of IndexIQ jumps in as well to point out how a few things are in play. He explains how, when the price of ETF drops to a very low number, people see daytraders willing to jump in and start trading millions of shares, which is similar to what happened with oil and USO.

With airlines getting so beat up, some believe there’s an opportunity to get in and take a shot. That’s why an ETF like JETS may allow investors to buy in low and have it work out. As of now, however, riding it out is seemingly the only current course of action.