You are at:Home»Expert Insights»Dave Nadig On Gold And Citigroup’s $2,500 Target 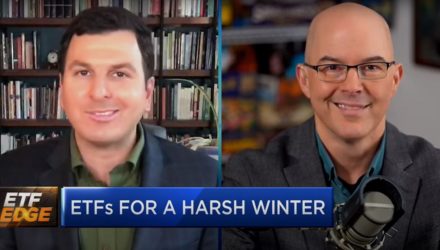 Looking at something generally sturdy in the market, gold prices have actually been coming under pressure ever since the recent Covid-19 vaccine announcement. However, many experts believe that gold still has time to shine.

ETF Trends’ CIO and Director of Research, Dave Nadig, and CEO and Founder of GraniteShares, Will Rhind, spoke on “ETF Edge,” with CNBC host Eric Chemi about the prospects of gold, following Citigroup’s bullish issue of a $2,500 target for gold.

To address where gold ETFs may be headed going into the new year, Rhind believes they are going higher. Stimulus would be at the top of his list for reasons why, as it’s driven a lot when it comes to gold prices this year. That said, there’s also the weaker dollar, inflation expectations picking up, and then the fall of real yield, given the market’s continuing volatility.

“For me,” Rhind explains, “The conditions that drove gold to an all-time high this year are still in place. I think it’s just natural that once you arrive at an all-time high in an after-class, there’s consolidation afterward, which is what we’re seeing. However, the fundamental conditions are still here, and I believe that they will be here for the next 12-15 months minimum as well.”

Nadig adds that the fundamentals of the gold market are looking bullish as well too. Yes, other factors make a difference on a macro level, but there’s also a very constrained supply. This is a market that has still been affected by Covid, just like every other industry. None of it has opened up very much either, so the supply lines are also constrained.

And yet, demand has never been higher. ETF investment demand for gold is at an all-time high, and that’s probably not going to change. So there are these big macro drivers, and at the same time, the fundamental microeconomic structure of the gold market is bullish as well.

As far as this $2,500 target, Nadig believes these are the sort of production that don’t need to have much attention given to them. Instead, he is more focused on the drivers, which seem bullish for gold right now.

Nadig adds, “It’s hard to argue with thousands of years of history of folks looking to gold as a solid value during times of crisis, and I don’t know what we’re in if it’s not a time of crisis.”

Dave Nadig and Will Rhind Get In On Gold: