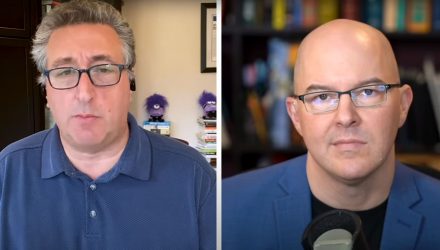 It’s time to settle the arguments claiming ETFs to be some sort of disaster in this current economic client. ETF Trends CIO and Director of Research Dave Nadig appeared on “The Compound” with Barry Ritholtz, Chairman and CIO of Ritholtz Wealth Management, to go over the real impact of recent market conditions on ETFs.

With the bond market acting up relative to what’s going on, there’s been a question concerning the trading of equity markets and the state of stock ETFs. Nadig makes it clear that they’ve been doing perfect in the sense that there hasn’t been any big disconnects, trading hiccups, or even “flash crashes” that would put investors off 90% fair value. If something major were going to happen, it would have occurred during the three days when the circuit breakers kicked in.

“It was a real test of the infrastructure to keep opening and closing, not only ETFs but the whole market at the same time. And for the most part, we really didn’t get any hiccups that I was able to find. So, that’s great. We’ve seen a ton of flows,” Nadig states.

This is the other message, as there have been enormous flows in and out of various equity ETFs. These come from the expected areas, including energy ETFs, and the reallocations inside large cap equity. While some funds have had to contend with big changes, the cheaper versions of certain ETFs have seen those increased flows.

People are using the state of things as an opportunity to do some reallocation, possibly avoiding some taxes they had embedded. Overall, however, there’s been clear evidence of ETFs being the dominant way of expressing people’s opinions. As Nagid adds, there’s been somewhere around 45% of the dollar volume on the market during the peak volatility days was made of up ETFs, which is unheard of.

Ritholtz points out that there have been 10-day thousand-point swings in the Dow, up and down 4-6% moves every day. So the question is – how did the ETF universe hold up under the stress of massive price movement and huge volume flow. As Nadig points out, the only place where this has been a real issue is in the leveraged and inverse complex, which comes down to the amounts, as opposed to the structure. And, with that in mind, leveraged and inverse makes of a tiny percentage of the ETF space as a whole.

Also worth noting that the underlying in those ETFs are not equities, but futures. Nadig makes it clear that it does depend on the fund, citing the ValFunds, along with the oil funds as ones with infinite capacity. However, funds doing double, triple in either direction on VIX futures when there were spikes that went from VIX 30 to VIX 60 instantaneously, it creates a real problem, as those funds have to reinvest at the end of the day.

As far as any relation to the big blow up in VIX notes seen a couple of years ago, Nagid explains how that’s not a factor. Really, the problem with VIX is that it’s inherently very volatile and uninvestable, making for a problematic investment.

The question then surrounds volatility on volatility, and whether or not small businesses want to put their money into, or if this is strictly a day trader and an institutional hedge circumstance, as opposed to being something more investable. Nadig explains how this comes down to investors and business essentially making gambles.

“Nobody has any business predicting whether ‘VIX at 50 is high or low’ based on where it’s going to close today or tomorrow,” Nadig states. “There’s more uncertainty there than trying to guess the close on the market today by a longshot because you’re dealing with these pro-cyclicality issues, the futures market, and the opinions of options traders. Still, nobody has any business investing in this. It’s a speculative vehicle designed to capture a certain kind of sentiment in the market. It’s a sentiment indicator that you can put money behind.”

As far as how the core equity funds have held up during all of this, let alone manage the stress when it comes to power taken from the volume, Nadig feels they’ve been handled perfectly. Everything has amounted to average trading. So again, there’s been no hiccups or disconnects in the operational structures. In many ways, it’s been the finest hour for ETFs, as they’ve been able to absorb so much of the money that has come out of mutual funds.

The final question concerns discounts to net asset value, and whether trading is at a premium or a discount, or if it is still getting arbitraged relatively quickly. As Nagid explains, on the equity side, it’s getting arbitraged out fast. Overall spreads in the market are wider than a few months ago, but that’s a very rational response. Still, that’s about all that’s been seen. It’s really been appropriately widening for the volatility in the market.