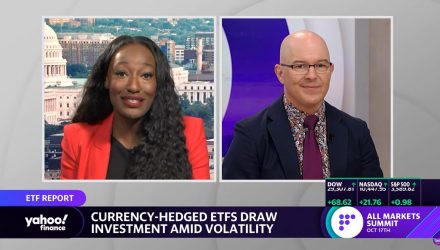 VettaFi financial futurist Dave Nadig appeared on Yahoo Finance to discuss so-called “anti-woke” funds. Many of these funds have focused on being anti-ESG by adding exposure to the oil industry and sectors that tend to have more negative environmental impacts. Funds like the newly launched God Bless America ETF (YALL) have managed to get attention, but Nadig sees that fund as using a different tactic. Nadig said YALL, “isn’t pretending to go anti-ESG so much as ‘anti-left.'”

With all of the ink spilled about these anti-woke funds, some investors might wonder what will become of ESG investing. Nadig doesn’t see ESG as having anything to worry about, especially considering the amount of institutional money already in those funds. Nadig said, “the ESG side of that equation isn’t going anywhere – there’s still an enormous amount of money chasing that as well.”

A PWC study sees ESG investing as growing from $15 trillion to $30 trillion in the U.S. Given the enormous amount of money in ESG, Nadig noted that the money going into these reactionary products is trifling in comparison. “ESG is outperforming in most reasonable time frames. Maybe not the last three months,” Nadig said, indicating larger time frames show that many ESG funds are beating their benchmarks.

Politics as Unusual in Anti-Woke ETFs

Nadig doesn’t think there will be much of a pullback of asset flows into ESG investing. He also sees the narrative around the political blowback as likely to die down. “If you look at, for instance, what they were trying to do in Texas, where they were trying to blackball BlackRock, it made for great headlines. When you went under the hood, it was a really de minimis amount of money that was going to be pulled from BlackRock.” Texas also had to do a carve-out in their policy upon discovery that BlackRock was running their energy fund.

“It makes for a great headline to say ‘we’re firing BlackRock,’ but it doesn’t actually move the needle on getting more drills in the ground,” Nadig said.

Asked about the returns of these funds, Nadig expressed the challenges around defining ESG. “When we think about Carbon, that’s an easy one to understand. Investing or not investing or anti-investing in the net-zero carbon transition – that’s a pretty clean way of thinking about it. When you start layering on things like social issues, governance issues, honestly, I think the numbers get much harder to tease out,” he went on to note that the long-term returns have been unequivocally positive. According to Nadig, “60% of institutions report that their ESG investments outperform their non-ESG investments.”

Postcards From the Currency Hedge

Pivoting for a brief dip into currency hedging, Nadig observed that people have been mainly avoiding it. Nadig said that when you compare the iShares MSCI EAFE ETF (EFA) to its hedged counterpart, the iShares Currency Hedged MSCI EAFE ETF (HEFA), the hedged version is beating it up 10%. “We saw this a decade ago with Japan, DXJ, a fund that really rallied more than the Japanese market because it hedged it out. We’re in a similar market, but investors really don’t want to be international at all,” Nadig said, noting the diminished appetite for international diversification.