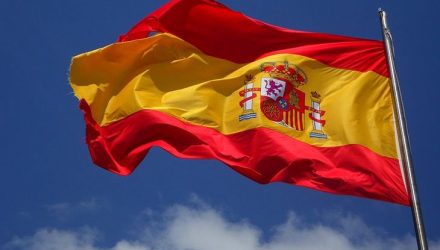 With a year-to-date gain of nearly 28%, the iShares MSCI Spain Capped ETF (NYSEArca: EWP), the largest exchange traded fund tracking stocks in the Eurozone’s fourth-largest economy, is one of the best-performing single-country ETFs this year.

EWP’s bullish ways are no fluke as economic data point to an ongoing recovery in Spain and potentially signal more upside for the ETF and Spanish equities.

Ebbing political volatility in Spain and some major improvements to local economic data are helping drive stocks there higher. Additionally, the bank-heavy EWP could benefit as Spain’s banks are viewed more favorably by global investors.

“The consensus at the start of 2017 was for the economy to lose steam this year as tailwinds faded and past reforms wore off. Now its renewed momentum — which has allowed the government to raise its forecast twice already — has some economists predicting the best year since the recovery started in 2014,” reports Maria Tadeo for Bloomberg.