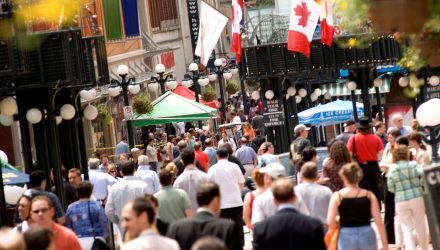 A Dandy Developed Markets Idea for 2018

Investors were partial to ex-US developed markets ETFs in 2017, a theme that sent the assets under management tallies soaring for an array of funds, including the Vanguard FTSE Developed Markets ETF (NYSEARCA: VEA).

VEA follows the FTSE Developed All Cap ex US Index. Unlike the MSCI developed markets options, this FTSE index includes Canada exposure, along with major markets of Europe and Pacific regions. Canada makes up 8.0% of the fund’s underlying portfolio. Last year, only two ETFs saw greater inflows than VEA.

“VEA allocates 22.2% of its weight to Japan. The Japanese market is widely viewed as inexpensive relative to U.S. stocks. Europe, another region attractively valued when measured against the S&P 500, accounts for almost 54% of this Vanguard ETF’s roster,” reports InvestorPlace. “VEA, which holds over 3,800 stocks, has a price-to-earnings ratio of 16 and a return on equity of 11.1%. The ETF surged 26.4%, outperforming the S&P 500 for the first time since 2012.”