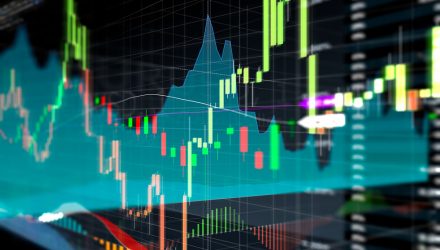 Historically, convertible bonds are solid performers during rising interest rate environments, but there are other reasons to consider the SPDR Barclays Convertible Securities ETF (NYSEArca: CWB). CWB is the largest convertibles exchange traded fund on the market.

Convertible bonds are a type of hybrid fixed-coupon security that allow the holder the option to swap the bond security for common or preferred stock at a specified strike price. Due to the bond’s equity option, convertible bonds typically pay less interest than traditional corporate bonds. The fund, though, does not convert its holdings into shares, but investors are exposed to the equity premium due to the way the bonds are priced.

CWB “provides market-cap-weighted exposure to the U.S. convertible-bond market across the credit-rating spectrum. While this market-cap-weighting approach reduces transaction costs, it leads to an unintended, concentrated bet in the technology sector,” said Morningstar in a recent note.

CWB allocates over half its weight to technology convertibles, but that makes sense because the sector is one the largest issuers of such debt. Fortunately for CWB, the technology sector is the best-performing group in the U.S. this year. That is helping drive performance for the ETF because convertible bonds often track equities on a fairly close basis.

Companies, notably those with speculative-grade debt ratings, like convertible bonds because they can raise money at rates lower than those on ordinary bonds.

Other CWB advantages include convertibles’ status as the top-performing bonds when rates rise and an expense ratio of just 0.4%, more than 70 basis points below the average actively managed convertible bond mutual fund.