You are at:Home»Alternative ETFs»Cryptocurrencies Can’t Make Up for Gold ETFs 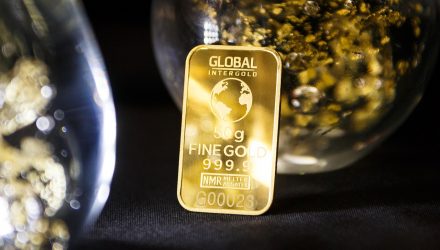 The cryptocurrency market is still in its early development stages and liquidity is sparse. Meanwhile, its pricing has behaved more on high return expectations. For instance, bitcoin, the most widely recognized cryptocurrency, has increased 13-fold in 2017 but it has exhibited volatility that is some 10 times that of the dollar-denominated gold bullion – bitcoin recently plunged more than 40% since its mid-December highs and has shown average moves of 5% each day.

“While this is good for investors looking for extremely high investment returns, it is hardly a characteristic of a currency, let alone a store of value, potentially limiting bitcoin’s use as a transaction token,” the World Gold Council said.

Along with the various market differences of gold and cryptocurrencies, at the end of the day, gold is a widely authorized and regulated asset that trades in many markets. Some observers are concerned that cryptocurrencies are at great risk of sudden restrictions from countries concerned about capital flight. For instance, China has greatly restricted their use, and more recently, South Korea has announced more regulatory measures.

Furthermore, on a tax basis, the U.S. Internal Revenue Service see each transaction on cryptocurrencies is considered an asset sale, which can complicate transactions with retailers like Amazon, Target and Wal-Mart, limiting its use as an actual currency alternative.

“This brings us to the point of whether cryptocurrency is being used for transactions or if it is traded and held more as a speculative investment,” the World Gold Council added.