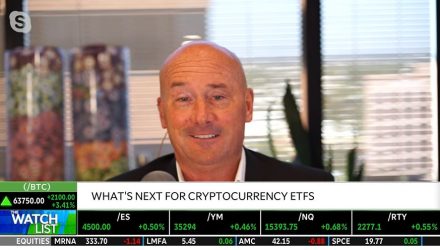 It’s a big day — the ProShares Bitcoin Strategy ETF (BITO) has launched, giving everyone a chance to somehow invest in cryptocurrency. ETF Trends’ CEO, Tom Lydon, was on hand to discuss this bitcoin event with TD Ameritrade’s Nicole Petallides.

As noted, this event has been a long time coming, and it’s very important. The financial advisor community has seen plenty of increasing interest among their clients for getting into cryptocurrency, but there wasn’t enough confidence for various reasons. Now, with an approved ETF, the ability is there to give an appropriate allocation to clients. Additionally, investors who are trying to save for their retirement and may be concerned about inflation now have another option to look to.

Going forward, as far as the potential of other products, Lydon points out how companies including VanEck and Valkyrie are soon going to have futures strategies products arrive as well. The big question is if there will be “physically-backed” versions, similar to GLD, for example, coming to market.

Gary Gensler, Chairman of the SEC, isn’t too confident in seeing a physically-backed version all that quickly as the SFTC, which oversees the futures area, provides confidence but also comes from past history. With those being areas Gensler is comfortable with, Lydon thinks it’s hard to see Gensler putting similar support behind a quicker progression for this bitcoin era. If anything, something may eventually come along in 2022.

Lydon adds, “For now, it’s a great alternative. There’s a high correlation. There is some concern with the amount of space in the futures market, but we’re watching it closely, and as far as launches, this bitcoin ETF is going to be in the top 10 of all ETF launches.”

Looking at other similar but different investments, products like Coinbase and Dogecoin, Lydon makes it clear that there are other ways to participate. Many crypto miners are publicly traded. Many thematic strategies in ETF form are out there, providing those other products for the portfolio. Additionally, many publicly traded companies are in the blockchain area, and the companies that have embraced this will be able to take full advantage of these sorts of transactions that will be much more seamless in the future.

Focusing back on bitcoin, Lydon notes, “There’s a lot of encouragement for Wall Street because, to a degree, it’s been endorsed by the SEC, but it’s been validated, and we’re watching very closely.”

As far as Gensler’s involvement, Lydon believes that he has been critical in getting to this point. Gensler taught subjects about cryptocurrency and its future as a professor. Once having more responsibility as part of the SEC, it meant taking a slower approach to assessing the nature of this movement properly. With that in mind, Lydon is confident that Gensler has done a terrific job of communicating with all of the issuers out there as things have moved forward over time.

Lydon adds, “This is not something that just happened overnight. They’ve been working on it for years.”