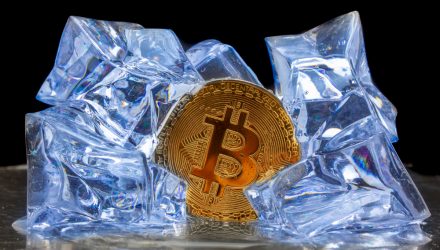 Investors interested in crypto may understand that they may need to wait a while for the crypto winter to thaw, but it’s fair to say that the FTX drama and bankruptcy has rattled the industry. Those investors may be interested by the idea of keeping their Bitcoin in “cold” storage, but another alternative is the Bitcoin futures ETF pairing of the ProShares Bitcoin Strategy ETF (BITO) and the ProShares Short Bitcoin Strategy ETF (BITI).

Bitcoin holders may not know what it means to put their exposures in “cold” storage, which involves holding digital assets so they are disconnected from the internet, but the Bitcoin futures market is another alternative to strategies that directly hold cryptocurrencies like Bitcoin or Ethereum which are trading at steep NAV discounts, according to Simeon Hyman, global investment strategist at ProShares.

BITO builds capital appreciation through its Bitcoin futures contract use, having added $13.2 million in five day net inflows. BITO has seen its returns rise over the last month compared to the last three months, from -31.2% over three months to -13.9% over one month.

BITI, meanwhile, seeks a return that is -1x of the S&P CME Bitcoin Futures Index for a given day. BITI has also seen notable net inflows over the last five days, with $13.4 million in that time. The ETF has returned 7.5% over one month, with returns of 27.5% over the last three months.

With neither BITI nor BITO directly invested in Bitcoin, crypto investors who still believe in the long-term value of decentralized currencies and the power of the blockchain may be interested in the appeal of futures as an alternative to spot Bitcoin products that trade at sizeable discounts or a “cold” storage approach. If so, it may make sense to follow a Bitcoin futures ETF like BITO or its sibling BITI.