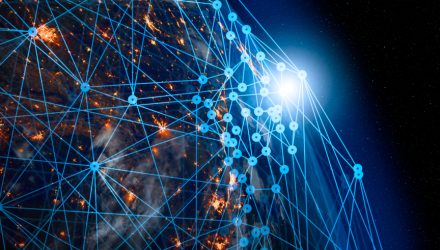 More Countries Explore Blockchain Use: Capture the Trend With This ETF

While cryptocurrencies have fluctuated up and down, one constant has been the increasing interest in blockchain technology, and it’s not just companies getting in the game, but whole countries.

The Philippines, for example, is exploring the use of blockchain technology to launch a training program for researchers in the government’s Department of Science and Technology (DOST). A DOST official noted that research is being conducted to determine how blockchain technology can be of benefit to enhance healthcare, financial support, and emergency aid.

Brazil is another country that is already putting blockchain technology to work in order to track public expenses to help curb corruption amongst government officials. While still under development, the Brazilian Blockchain Network (RBB) will also be used in various public institutions to provide efficient government services offered to citizens.

In Singapore, the Monetary Authority of Singapore (MAS) announced that it is looking into use cases for blockchain technology. The project will collaborate with financial giants like JPMorgan to determine how blockchain technology can be of benefit, particularly with regard to asset tokenization.

“Developed on public blockchain, this pilot is also pivotal as it furthers efforts to innovate, advance and scale institutional financial applications on blockchain and their interoperability across different blockchain networks with the long-established rails of the existing financial markets. We believe that these early explorations in DeFi solutions will ensure the competitiveness and relevance of Singapore as a cutting edge financial centre,” said Han Kwee Juan, group head of planning and strategy at DBS.

Get Active on Blockchain

Prospective investors looking for blockchain exposure can run through an expansive list of companies that operate directly in the sector or established companies that are looking to integrate the technology as part of their existing core operations. That could all be made easier using the Amplify Transformational Data Sharing ETF (BLOK).

Active management essentially puts the research and capital allocation in the hands of a professional so that the investor doesn’t have to do all the legwork themselves. The result is diversified exposure that runs the gamut of companies that operate in the blockchain sector, such as those that facilitate transactions, mine cryptocurrencies, and provide technology for blockchain operations, to name a few.

The fund seeks to provide total return by investing at least 80% of its net assets (including investment borrowings) in the equity securities of companies actively involved in the development and utilization of transformational data sharing technologies. It may invest in non-U.S. equity securities, including depositary receipts.