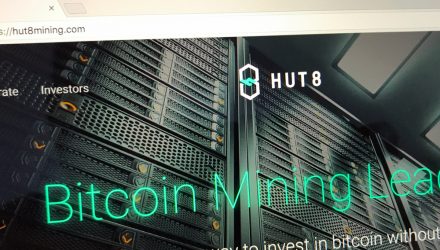 Canadian crypto miner Hut8 (HUT), which began trading on Nasdaq on June 15th of this year, has almost quadrupled its Q2 revenue compared to last year.

According to a release of financial statements for this year, Hut8 made $27 million in the second quarter of 2021. Operating profit was $6.5 million.

Hut8 predicts it will increase its earnings in Q3 and Q4 as well, as the company deploys new mining machines. Hut8 says it could mine as many as 22 Bitcoins a day in Q4 and between 14-16 in Q3, according to an August investor presentation.

Hut8 currently has 109 MW of mining capability and plans to increase its capacity to 209 MW in 2022. According to the investor presentation, Hut8 has the largest operations of any other public mining company.

Several ETFs have exposure to HUT, with the VanEck Vectors Digital Transformation ETF (DAPP) having the most significant HUT holding.

DAPP has 26 holdings and over $42 million assets under management, 5.40% of which are held in HUT.

The ETF bridges the gap between crypto and more mainstream assets, holding a diverse range of stocks including large technology companies like Square (SQ) and Microstrategy (MSTR), as well as mining companies like Hive Blockchain Technologies (HIVE), Bitfarms Ltd. (BITF), and, of course, Hut8.