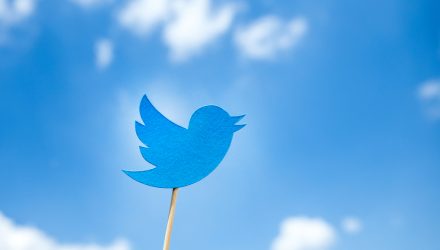 Crypto has largely taken a ride on the macroeconomic train that is driving losses in U.S. markets, and in a rapidly changing market environment, active management can be a boon, particularly in volatile spaces such as crypto where huge moves can sometimes happen within hours.

One particular example of this is the way that the Amplify Transformational Data Sharing ETF (BLOK) portfolio managers handled the turbulence surrounding Elon Musk’s announcement that he was seeking to acquire Twitter. As investors waited on news of whether the deal was actually going to be possible (it was) and the announcement of whether Musk would take Twitter private (he will), the portfolio team made the decision to sell out of their shares of Twitter at 1:00 PM on Monday, April 25.

“There was very little upside left and any of the upside that was left had nothing to do with blockchain, so we removed it from the portfolio,” Amplify explained on a call with ETF Trends.

At 3:00 PM, the announcement was made that Musk would be purchasing Twitter for $44 billion, and the stock dropped and is currently below the prices at which BLOK sold its holdings.

Coinbase is another great example, having just reported a first-quarter loss in its earnings report with revenue that was down 27% year-over-year. Shares have subsequently taken a nosedive today in trading. Coinbase, a major cryptocurrency exchange, has seen a drastic reduction in users and trading volume in the first quarter of 2022, reports CNN, as crypto volatility has driven many risk-off investors to safer havens for their money in a challenged macroenvironment.

Coinbase, as of March 31, 2022, was the fourth-largest holding within BLOK at 4.24% weight, according to the BLOK newsletter; currently, Coinbase is outside of the top 10 holdings at 3.1% weight in the fund with its position having been reduced by the active managers.

Crypto is currently being battered alongside broader markets, but current prices may not reflect the growth happening within the sector.

“We strongly believe the dynamics in the industry remain strongly in driving corporate growth and industry disruption and our core/secondary approach to diversification across seven categories led to outperformance over other passive and more concentrated alternatives,” write the authors of the newsletter, discussing the fund’s performance in March.

BLOK currently has $681 million in AUM, is actively managed, and invests in companies directly involved in developing and using blockchain technology. BLOK was also the first blockchain ETF approved by the SEC and launched in 2018.

BLOK spreads its holdings across the size spectrum, investing in all market caps. As of the end of March, top allocations within the blockchain industry included transactional at 34.74%, crypto miners at 22.05%, and venture at 11.56%. BLOK invests across the blockchain landscape in miners, exchanges, and developers.