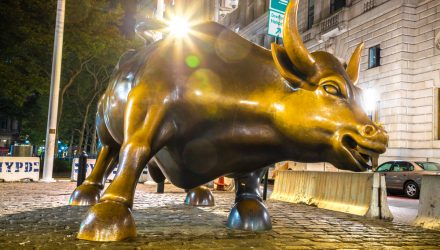 Ethereum, the blockchain backbone for the cryptocurrency known as ether, is one of the key components in the emerging decentralized finance (defi) space.

Increasing adoption of the platform as an avenue for everything from old school transactions to sales of non-fungible tokens adds price support and buoys the long-term investment thesis. As VanEck research points out, layer 1 protocols and scale could be catalysts that eventually send ethereum to a market value of $2 trillion.

“The performance of FAANGM stocks over the past decade demonstrated the relevance of scale in software platforms,” writes Matthew Sigel, VanEck head of digital assets. “Ethereum currently boasts the largest developer community and widest variety of applications, including multiple central banks, among layer 1 protocols. To the extent the scale advantage keeps costs lower than the competition, switching would be unattractive.”

While the case for ethereum is compelling, and increasingly, it faces competition and not just from bitcoin. In fact, ethereum fills voids bitcoin doesn’t, but some central banks could eventually master digital currencies and encroach upon ether’s territory.

“Central bank digital currencies (CBDCs) are likely to be a competitive threat but may not be an existential one,” adds VanEck’s Sigel. “Digital money is most useful to the extent that it is programmable, and that requires a developer ecosystem to execute nifty use cases. While the government no doubt will wield significant market power in the space, in our view, usually the private sector produces a better product.”

That is to say, ethereuem, like any new successful technology, is drawing competition. However, the platform is building leads in areas such as banking and real estate transactions and as an avenue for software development, among other functions.

That highlights an important point about ethereum and one that differentiates it from bitcoin. Ethereum is taking the shape of an operating system for smart contracts and the broader crypto universe. Beyond the obvious, there’s also an overlooked benefit to higher ether prices: Improved security.

“The more Ether locked in the system for consensus, the higher the security for the network. Taking this a step further, a higher price in Ether creates a more secure network as it becomes increasingly more expensive to gain control over a majority of the circulating supply,” according to EthereumPrice.org.