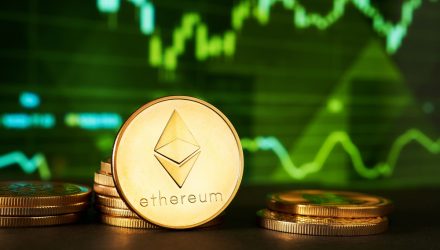 Ethereum’s recently completed merge – one of the more widely anticipated cryptocurrency events in recent memory – isn’t yet lighting a fire under crypto-correlated stocks, but there’s lingering hope the merge will have positive medium- to long-term implications for crypto equities.

One reason that the Ethereum merge isn’t yet stoking upside for holdings in BLKC and SATO is the fact that the bulk of the publicly traded crypto miners, including those residing in these ETFs, mine bitcoin, not ether.

“Because the primary change is the move from mining to staking, the Merge would affect Ethereum miners the most out of companies within the ecosystem. However, most public crypto mining companies focus on mining Bitcoin with the exception of HIVE Blockchain Technologies (HIVE CN) and Hut 8 Mining Corp (HUT CN). Fortunately, ETH mining equipment is much cheaper and flexible than BTC mining equipment so current ETH mining equipment can be repurposed. ETH is mined using graphic processing units (GPUs), which are standard computer hardware and can be used for multiple purposes including mining various digital currencies,” noted Alerian analyst Roxanna Islam.

There are other potential, longer-ranging benefits from the Ethereum merge that could accrue to BLKC and SATO, including the possibility of more revenue for crypto exchanges such as Coinbase (NASDAQ: COIN).

“The switch from mining to staking should benefit companies that either participate in staking or serve as a platform for staking,” added Islam. “Staking involves depositing ETH to act as a validator, which can then produce rewards based on the balance deposited (similar to earning interest at a bank). To make the process simpler, platforms like Coinbase (COIN) can facilitate staking in exchange for a percentage of the yield. The company has already seen an increase in revenue from its staking services over the past few quarters from ETH and several other digital currencies.”

SATO, which benchmarks to the Alerian Galaxy Global Cryptocurrency-Focused Blockchain Equity, Trusts and ETPs Index (Index), allocates 3.35% of its weight to Coinbase, making the stock the ETF’s seventh-largest holding.