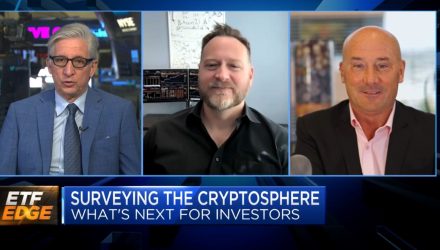 With ProShares’ Bitcoin Strategy ETF (BITO) now out in the world, the gates are open for more to follow. CNBC’s Bob Pisani was joined on “ETF Edge” by ETF Trends’ CEO Tom Lydon and Steve McClurg, CIO of Valkeryie funds, about the Valkyrie Bitcoin Strategy ETF (BTF) and what to keep an eye on in the coming months when looking at the crypto market.

With BITO at over $1.1 billion in trading over the first four days, McClurg got into what sets BTF apart. For starters, despite launching on a Friday (the worst day to launch a new fund), Valkryie still achieved the 14th biggest ETF launch of all time. For a relatively new firm going up against heavy hitters, that’s certainly nothing to scoff at.

Something to keep in mind with these bitcoin ETFs is the role of issuers’ futures front month contract position limits and how to track them properly. For Valkyrie, it was important to rely 100% on the October contracts based on the current price of bitcoin. It comes down to currency limits, as growing any larger has the potential to cause issues.

The concern then turns toward possibly extending the limits. For Lydon, as far as how much it will cost investors to continue rolling over into these futures contracts, he notes how each issuer is limited to 5,000 contracts. That makes limits a concern for ProShares, which has applied for an extension. If that doesn’t happen, the idea would be to look into other structures to fill the demand.

For Valkyrie, when it comes to how to make up for demand, given certain limits, McClurg explains, “The best strategy is to open up the playing field and let other ETF issuers in. We have possibly one more this week and two more next week. That demand will be filled by a multiple of issuers that will create really strong competition here.”

As far as the individual investor is concerned, when looking at contract limits they may not understand offhand, the demand for bitcoin futures should be solved by simply extending the limits. For McClurg, he argues that there presently isn’t a need to. One can go up against around $1.2 million and still be within limits. With other issuers coming in and providing more options, it will lead to better tracking error. That said, as it grows beyond just a few issuers, an extension will likely be needed.

As far as what this all means for advisors and whether or not they will recommend bitcoin futures, Lydon points out how there’s a lot of demand among clients. 81% of advisors are getting questions about crypto. This is due to the search for a proper ETF wrapper with all the benefits, along with tight spreads and lower fees. Still, at this point, there’s still concern about the pure volume.

As Lydon puts it, “Remembering when GLD first hit a billion dollars pretty quickly, when it was five billion, they were so excited they couldn’t believe it. Last summer, GLD was at $83 billion. That’s not to say the Bitcoin ETF is on this path, but could you imagine if the combined market places $10 billion down — what does that do to the overall structure?”

When considering if the approval of the bitcoin futures will affect the narrative behind a physical bitcoin ETF, there may not be a level of confidence from Gary Gensler, Chairman of the SEC, that any such product will be supported. For Lydon, even when looking at what’s happened just recently, while it would be great to take full advantage of the opportunity, Gensler may be set in his ways for now, but the results certainly show the potential.

“We see the spreads are very tight so far,” Lydon adds. “We’re going to continue to see demand, and advisors are going to start trickling in. If they don’t come with some type of plan, they’re going to have to cover it up with some type of narrative, and it may be that they’re not overall comfortable with the infrastructure of futures. However, I think that whole situation is going to take care of itself.”

Gensler has clearly noted that while approved, nothing has been completed as of yet. However, as an industry, it will need to be validated, which Lydon does believe will be coming soon enough.