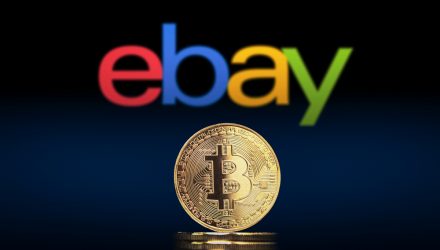 Bitcoin spent ample time in the spotlight last week as Russia escalated its invasion of Ukraine, prompting some investors to mull the cryptocurrency’s status as a risk asset or a safe haven play.

However, there was some other news relevant to bitcoin and the crypto universe at large that investors might want to consider. There’s growing speculation that eBay (NASDAQ:EBAY) could soon announce that it will accept bitcoin and other digital coins as forms of payment.

“There is ongoing speculation that eBay could announce an initiative to accept Bitcoin or other cryptocurrencies as a form of payment. CEO Jamie Iannone recently said in a recent interview with TheStreet.com that eBay is studying the possibility of accepting cryptocurrencies,” reports Eric Savitz for Barron’s.

The rumors are intensifying ahead of eBay’s analyst day on Thursday, March 10. Should the e-commerce marketplace embrace bitcoin and other major cryptos, the decision could have implications for exchange traded funds, including the Valkyrie Balance Sheet Opportunities ETF (VBB).

VBB, which debuted last December, is an actively managed fund that provides exposure to publicly traded companies that have exposure to bitcoin.

“This may include companies that invest in or have any portion of their assets accounted for by direct bitcoin holdings, including companies that hold or transact in relatively small amounts of bitcoin. The Fund may also invest up to 20% of its net assets in companies that do not meet the innovative balance sheet criteria above but otherwise operate in the bitcoin ecosystem,” according to Valkyrie.

While some investors believe that the only companies currently holding bitcoin directly are miners, the truth is that the universe is expanding and includes the likes of Tesla (NASDAQ:TSLA) and fintech companies such as Block (NASDAQ:SQ).

And while eBay itself hasn’t confirmed that it will accept bitcoin nor has it announced that it will hold that asset on its balance sheet if it accepts it as payment, an e-commerce company doing that makes some sense. In fact, VBB holds shares of both Overstock.com (NASDAQ:OSTK) and Latin American e-commerce giant MercadoLibre (NASDAQ:MELI).

Even if eBay splits the difference and accepts bitcoin as payment while not holding it as an a potentially appreciating asset, VBB could benefit because in that scenario, eBay would be enhancing the bitcoin usage case.