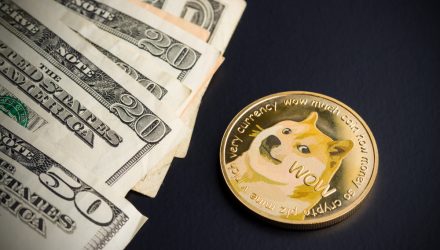 Dogecoin Skyrockets Over 400% in Just 7 Days

Dogecoin (DOGE) refuses to be the underdog in the bid for cryptocurrency popularity. The play on Bitcoin launched in 2013 by software engineers Billy Markus and Jackson Palmer has found serious traction over the past week.

On Wednesday, Dogecoin hit 10 cents for the first time, growing rapidly over the next few days. As of mid-Friday, its total market cap had surpassed $52 billion according to CoinDesk.

As with other cryptocurrencies, Dogecoin is seeing tailwinds from the Coinbase (COIN) listing on Wednesday. Bitcoin hit an all-time high of $64,000 on Thursday, while ether surpassed $2,500 for the first time on Friday morning.

Dogecoin is based on a wildly popular meme from 2013 that featured a dog with Comic-sans font phrases, often without discernible meaning. According to CNBC, it was meant to be a fun “alternative to Bitcoin [that]has since found a growing community online.”

As is common with cryptocurrencies, Dogecoin is subject to volatile fluctuations in price, but has been gaining in popularity this year. Reddit subgroup r/SatoshiStreetBets garnered attention for Dogecoin, as part of a concerted effort to bring more attention to cryptocurrencies. The subreddit proclaims itself to be the “Crypto version of r/WallStreetBets,” which saw the rise of GameStop shares early this year.

Dogecoin’s rapid ascent has signaled fears of a bubble for many investors in the cryptocurrency market.

In an interview with CNBC, David Kimberly, an analyst at Freetrade, a U.K. investing app, expressed concerns that many investors are buying only in hopes of others also buying in and forcing the price higher. “The bubble eventually has to burst and you’re going to be left short-changed if you don’t get out in time. And it’s almost impossible to say when that’s going to happen,” he said.

“This is doubly the case in the crypto markets where a small group of players often hold a huge chunk of the total number of ‘coins’ in circulation.”