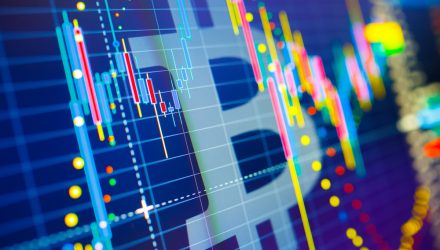 Despite bitcoin’s volatility, investors still want in. While bitcoin’s price is estimated to swing an average of 4.55% per day over the past month, the ProShares Bitcoin Strategy ETF (BITO) has been steadily bringing in investor money.

On its first day on the market in October 2021, BITO brought in $550 million. In its first week, the bitcoin futures fund raised $1.2 billion, becoming the fastest ETF to reach $1 billion in assets under management. Since that first week, BITO raked in an additional $500 million in inflows, according to figures from ETF Database.

Hyman explained that not only are there multiple exchanges in which to trade bitcoin, once an investor picks their exchange, but they must also determine which key or wallet to use (cold or hot). “This solves for ease of putting this in your brokerage account,” he added.

BITO also resolves the multiple exchange issue because the settlement price is an amalgamation of all the exchanges. “You put all that together with the ETF structure and you’ve got a solution that solves a problem and serves a need,” Hyman said.

BITO also solves the needs for multiple constituencies, according to Hyman. Its liquidity and options and tight spreads make the fund a great option for investors with a short-term horizon. He added that it’s also well-positioned for a buy-and-hold investor.

BITO currently has more than $1.1 billion in investor assets and carries an expense ratio of 0.95%.