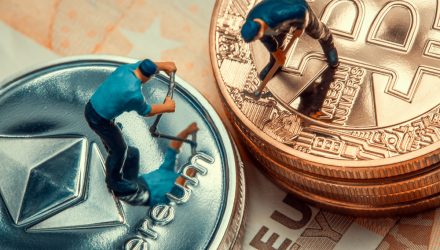 As Crypto Grows, How Will Bitcoin and Ethereum Play Off Each Other?

Bitcoin is still the king of the cryptocurrency space, but when it comes to rapid price appreciation, there’s a new sheriff in town: Ethereum.

Ethereum is the blockchain on which the crypto known as Ether trades. Ether may never catch Bitcoin in terms of market capitalization, but it doesn’t have to as it’s a solid number two in the crypto space. Moreover, many market observers believe Ether has more gas in its tank.

“A reflection of this, the chart of the spread showing the decline of Bitcoin against the rise in Ethereum has become one of the most popular on Twitter in recent weeks. It is being used to support the view of further Ethereum outperformance, based on the inverted head and shoulders bottoming pattern,” says Tony Sycamore, APAC Market Analyst at StoneX (NASDAQ: SNEX) Retail Division, City Index.

Granted, Bitcoin isn’t old. Ethereum is even younger, meaning some critics may question the idea of spread trading between the two, but Sycamore highlights efficacy in the strategy.

“While some may question the use of a spread chart that relies on only 6 years of price data for Ethereum, it is notable that spread trading strategies between coins are increasing in popularity to trade in this rapidly developing space, he says. “To put the speed of the evolution of cryptocurrencies in context, Bitcoin as noted by JP Morgan has ‘already achieved the fastest-ever price appreciation of any must-have asset to which it is often compared, such as Gold (1970s), Japanese Equities (1980s), Tech stocks (1990s), Chinese Equities (2000s), Commodities (2000s) and FANG stocks (2010s).’”

Bottom line: crypto investors should expect Bitcoin to share the limelight with Ether for the time being. For those investing in the latter, that might be a positive.

“In light of this, it is reasonable to expect Bitcoin to share the market’s spotlight with Ethereum for a while longer, during its period of consolidation,” adds Sycamore. “With this in mind, the view is that Bitcoin completed a 5 wave impulsive rally on the 14th of April, at the $64895 high, starting from the March 2020 low. The decline from the $64895 high to the (prior) weekend’s $47555 low, is viewed as Wave a of a three-wave ‘abc’ correction.”