You are at:Home»Crypto Channel»BITO Inflows Remain Steady Despite Bitcoin Volatility 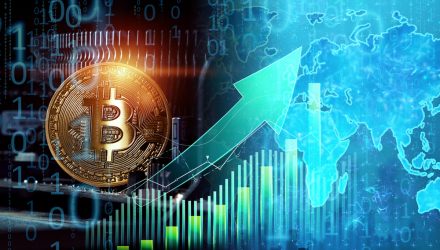 Bitcoin gave investors a wild ride in 2021 that culminated in a new all-time high last November, but despite the latest volatility, inflows into the ProShares Bitcoin ETF (BITO) have remained steady.

BITO certainly played a large role in catapulting bitcoin to its November all-time high with it becoming the first U.S. exchange traded fund (ETF) to focus on the leading cryptocurrency. While crypto purists may be skeptical about a futures ETF, it can work for investors looking for alternate exposure.

Global investment firm Goldman Sachs has that bullish sentiment for bitcoin. The firm is forecasting that bitcoin could reach $100,000 within the next five years.

“We think that bitcoin’s market share will most likely rise over time as a byproduct of broader adoption of digital assets,” said Zach Pandl, the co-head of global foreign exchange rates and emerging market strategy for Goldman Sachs.

BITOmania came and went but amazingly a) its traded >$100m every day of its life (unheard of) b) Aum steady thx to inflows despite a nasty 32% decline (like ARKK, theme ETFs, aum sticky bc serves complementary role to cheap beta in core). c) ann roll cost could end up below 10% pic.twitter.com/Cp3hfQSIIw

Still a Positive Year for Crypto

Despite bitcoin heading lower to end 2021, it still was a positive year for cryptocurrency in general. Institutional investment in the leading cryptocurrency grew, and wider adoption overall drew more interest in not just bitcoin, but the entire crypto space.

“What an eventful and intense year we’re wrapping up in this report. In 2021, bitcoin was adopted as legal tender in El Salvador, and several public companies added bitcoin to their balance sheets,” an Arcane Research report notes. “On the institutional side, open interest boomed on CME, and several bitcoin ETFs saw the light of day.”

“Additionally, we saw numerous Tier 1 investment banks begin offering bitcoin and crypto-related services such as custody and trading,” the report adds. “However, the year was not all filled with bullish news. Once again, China delivered bad news as they enforced a strict mining ban, leading the hashrate to temporarily plummet in bitcoin before returning to its pre-China ban levels six months later. 2021 saw bitcoin pushing towards new highs, reaching a new all-time high in November of $69,000.”