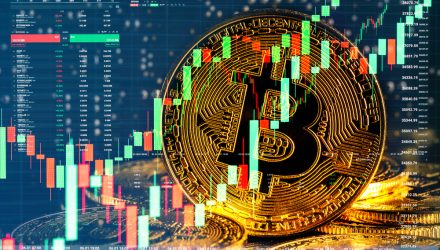 To add another notch to the gold versus bitcoin argument for investors, the ProShares Bitcoin Strategy ETF (BITO) has managed to surpass the previously held record for the shortest amount of time for an ETF to hit $1 billion in assets under management, hitting the milestone in only its second day of trading.

BITO has beaten out the previous record holder, the SPDR Gold Shares ETF (GLD), which hit $1 billion in AUM naturally over the course of three days, a record it held for 18 years. Today in trading, BITO officially hit $1.1 billion AUM without seed, ProShares confirmed to ETF Trends.

”The early success of BITO shows the attraction for investors of gaining exposure to bitcoin in their brokerage account, with the same convenience with which they can buy stocks and without the need to go through the hassle and learning curve of establishing a separate account for cryptocurrencies,” said Michael Sapir, ProShares CEO.

“The bitcoin market has matured to the point where the CME bitcoin futures market is actually the leading source of price discovery in the entire bitcoin world,” said Matt Hougan, CIO of Bitwise Asset Management, in an interview with CNBC on Monday. “Prices move on the CME market before they move on Coinbase, Kraken, FTX.”

Yesterday, BITO had over $1 billion in natural trades, which are grassroots trades amongst individual investors that don’t contain any giant creations that would drive volume up in huge allotments.

“I would expect its performance to mirror the front-month futures well, and for the contango in the futures to remain relatively contained, as it’s so easy to arbitrage out the difference between bitcoin and that front-month contract,” explained Dave Nadig, CIO and head of research at ETF Trends. “The caveat? It’s still a very new fund, and should it continue to gain assets quickly, it could potentially hit position limits that would impact its ability to track as well as it has so far.”

November will see the position limits for bitcoin futures double; they were previously at 2,000, but doubled to 4,000 by the Chicago Mercantile Exchange. The existing limit is something that BITO could very quickly run up against.