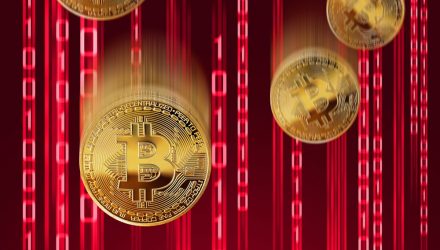 Bitcoin Slump Could Be Nearing Its End

That headline comes with the caveat that pinpointing when bitcoin’s slump will end is often a fool’s errand, particularly this year.

Still, some market observers believe that capitulation is near for the largest digital currency. If that outlook proves accurate, stability could arrive in this volatile market, potentially lending support to exchange traded funds such as the Invesco Alerian Galaxy Blockchain Users and Decentralized Commerce ETF (BLKC).

BLKC, which follows the Alerian Galaxy Global Blockchain Equity, Trusts and ETPs Index, is a potentially noteworthy play on bitcoin’s slump ending and a rebounding subsequently materializing because it features one of the deepest line-ups in this still-young ETF category.

The Invesco fund is home to 62 holdings, one of which is the Grayscale Bitcoin Trust BTC (GBTC), which accounts for 14.56% of the ETF’s weight. That suggests that BLKC is certainly levered to bitcoin price action.

“Bitcoin is continuing to show resilience around $20,000 but that’s really being put to the test as risk aversion sweeps through the markets once more,” said Craig Erlam, an analyst at broker Oanda. “A significant break at this point could be really damaging, with the following key level below here being the June lows around $17,500.”

In order for bitcoin and, in turn, BLKC to avoid further calamity over the near term, a couple of things need to happen. Those include digital assets’ correlations to equities declining and the dollar finally weakening.

“The first is that Bitcoin has been largely able to avoid the selloff that has hit the stock market in recent weeks, with the Dow Jones Industrial Average and S&P 500 both down almost 3% in the past five sessions. Cryptocurrencies should, in theory, trade as uncorrelated assets, but have shown to be linked to swings in other risk-sensitive assets, particularly stocks. Bitcoin has avoided the outsized downside it has been vulnerable to in the past,” reported Jack Denton for Barron’s.

Bitcoin and BLKC could also use the benefit of the Federal Reserve being less aggressive with its interest rate tightening efforts, but it remains to be seen if that will come to fruition.

“Bitcoin prices have proved tricky to predict in the short term—much to the chagrin of analysts’ and ambitious price targets—and cryptos are known for their volatility. But with inflation remaining high and the Federal Reserve showing few signs of stopping their tightening of financial conditions—which dents demand for risk-sensitive assets—Bitcoin is likely to remain under pressure,” according to Barron’s.

vettafi.com is owned by VettaFi, which also owns the index provider for BLKC. VettaFi is not the sponsor of BLKC, but VettaFi’s affiliate receives an index licensing fee from the ETF sponsor.