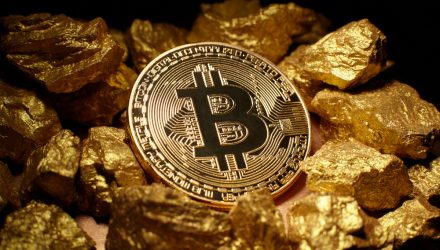 Bitcoin falling about 60% for the year may have struck down the narrative that the leading cryptocurrency could serve as a safe haven, but it’s slowly returning to form alongside gold.

Bitcoin, especially during the height of its bull run last year, has been touted as a way to park cash in an uncertain market environment, earning the moniker of “digital gold.” Of course, fast forward to the start of 2022, and its discorrelation from stocks and bonds fell to the wayside.

Bitcoin, for the most part, has been following both assets downward, but it’s been relatively stable over the past couple of months. Analysts over at Bank of America revealed that bitcoin has been standing alongside gold, regaining its safe haven status.

“Alkesh Shah and Andrew Moss of Bank of America Securities (BofAS) said in a recent report that the world’s largest cryptocurrency now had a high correlation with gold prices, suggesting it is being used as a hedge against wider market uncertainty,” a Decrypt article noted.

“At the start of September, the relationship between gold and Bitcoin once again turned positive, and in early October, the correlation reached its highest point in a year,” the article noted.

A rising tide of interest rates has the capital markets wondering if the U.S. Federal Reserve will continue tightening. As such, safe haven searching has investors rethinking bitcoin, especially given its recent correlation with gold.

“A decelerating positive correlation with SPX/QQQ and a rapidly rising correlation with XAU [gold] indicate that investors may view bitcoin as a relative safe haven as macro uncertainty continues and a market bottom remains to be seen,” the BofA analysts said.

Investors don’t have to settle for pure bitcoin exposure when looking to achieve correlation with its price moves. Futures can accomplish this, as can an exchange traded fund (ETF) that caters to bitcoin futures, like the ProShares Bitcoin Strategy ETF (BITO).

The fund provides exposure to bitcoin futures, tailing the price movements of the leading cryptocurrency on a normal market exchange. BITO has been exhibiting an almost one-to-one correlation with bitcoin’s price since its introduction a year ago.

Furthermore, the fund is actively managed, giving investors the peace of mind of knowing that their investments are in the hands of seasoned portfolio managers. Bitcoin can be a volatile asset, and active management can make portfolio changes on the fly when market conditions warrant an adjustment.

Investors may be hesitant to gain pure bitcoin exposure given its trading on unregulated exchanges. BITO provides this tactical exposure while staying within the regulatory framework of the traditional financial market, adding to its potential safety.