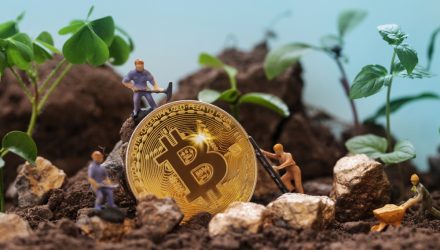 Bitcoin Miners Have Plenty of Motivation to Embrace Renewable Energy

Broadly speaking, the universe of publicly traded bitcoin miners is chock full of relatively young companies. This implies that growing pains are to be expected and opportunities to get things right are plentiful, too.

Fertile territory for improvement for bitcoin miners, including those residing in the VanEck Digital Assets Mining ETF (DAM), is to embrace renewable energy as a cornerstone of the mining process. Some DAM member firms are already doing that, and it’s a good thing because the industry is under fire to improve its sustainability posture.

The study indicates that carbon emissions from bitcoin mining surged 126% for the six years ending 2021. That’s more than enough for industry observers to sound the alarm bell regarding environmental sustainability. Translation: DAM components have ample motivation to start embracing or continue increasing usage of renewable energy.

Coal and natural gas are the primary power sources for bitcoin mining in the developed world, and miners need to consider that because prices of both commodities are soaring this year amid slack supplies.