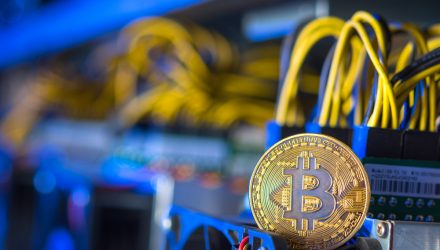 Bitcoin Eyeing the $50K Mark Before End of March

Bitcoin bulls are running with full steam ahead as the leading cryptocurrency continues to push higher. Some analysts are already forecasting that its price could hit $50,000 by month’s end.

After a year-end sell-off in 2021 and into January of 2022, bitcoin is regaining its footing. Amid an economic backdrop of rising inflation, bitcoin is re-establishing its potential as an inflation hedge.

“In the past 24 hours, Bitcoin surged by more than $6,000 at one point to above $44,000 – its sharpest daily increase since February 2021,” said deVere Group CEO Nigel Green. “As it currently stands, I can see no reason why this price momentum should falter.  I think we can expect to see Bitcoin hit $50,000 by the end of this month.”

Inflation isn’t the only key driver that has been pushing bitcoin higher again. Bitcoin is up 15% within the past month.

The world is certainly watching the situation in Ukraine play out as Russia continues to advance and flex its military might. Going on behind the scenes, however, is the strength of bitcoin as a medium of exchange that knows no boundaries.

The country of Ukraine has been receiving humanitarian aid via bitcoin, which is only helping to push the leading cryptocurrency higher.

“The Ukraine-Russia situation has caused significant financial upheaval and individuals, businesses and indeed government agencies – not just in the region but globally – are looking for alternatives to traditional systems,” Green said. “As banks close, ATMs run out of money, threats of personal savings being taken to pay for war, and the major international payments system SWIFT is weaponized, amongst other factors, the case for a viable, decentralized, borderless, tamper-proof, unconfiscatable monetary system has been laid bare”.

It speaks to the mobility of bitcoin, which can be used in any country and then transformed into the local currency. When local currencies such as the Russian ruble languish, bitcoin can be used as a safe haven.

“Developments in recent days have put a spotlight on Bitcoin’s key traits, which include being borderless, permissionless, censorship-resistant and unconfiscatable,” Green said.